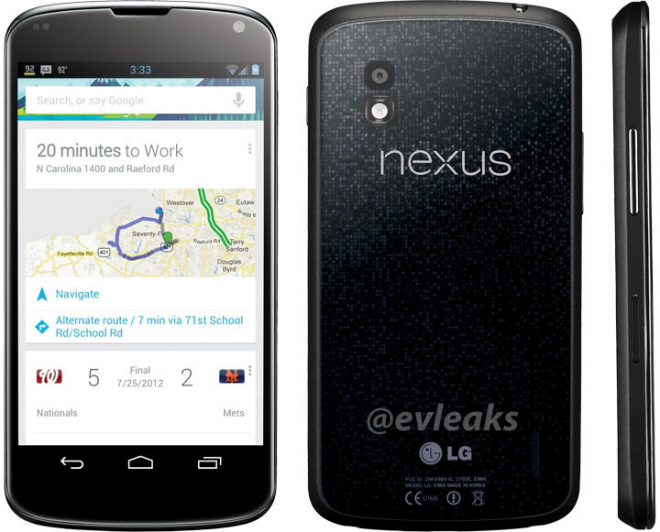 It has been even confirmed by an LG representative that Google will indeed reveal the Nexus 4 at their event this month. The device’s hardware configuration is the same to that of the current flagship model of the Korean manufacturer – the LG Optimus G. The Nexus 4 features design similarities to the Galaxy Nexus smartphone made by Samsung. A while back a forum user managed to get his hand on the upcomming device and posted a bunch of photos with it including complete hardware details.

This time is EVLeaks – source for rumors and upcoming devices photos – that shows us what seems to be a press shot of the LG Nexus 4. The design of the device is exactly the same to what we’ve seen on the Internet for the past few weeks. It has the same rounded shape and on-screen soft buttons characteristic for the Nexus devices. The image shows the Nexus 4 running Google Now with some cards for navigation and sports team score results. The back of the device is supposedly made out of very tough plastic and there is the 8MP camera with flash on the top. What more does the image say? Well nothing we didn’t already know from the rumors that have been fludding the Internet lately. We expect the device’s unveiling this Monday along with another rumored device – the Nexus 10 tablet made by Samsung.