BlackBerry 10 will be the OS that will make or break RIM’s future and it’s been revealing its true self by bits and pieces over the past months. Today we catch a glimpse into its notification system, based on the concept of “toast”. This is codename for simple notifications in a small pop-up, but this time we get a new idea, called Cinnamon Toast and French Toast. 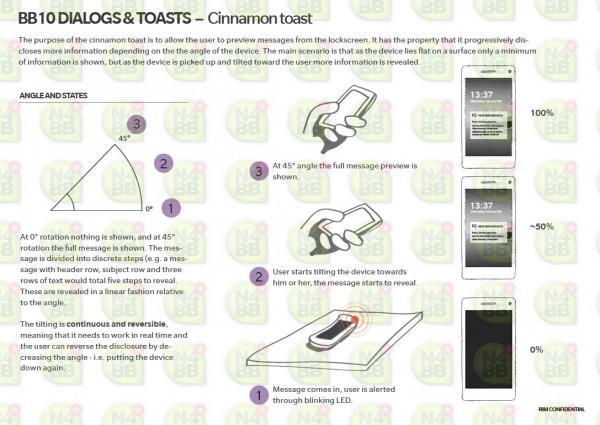 With Cinnamon Toast RIM has a nifty way of handling an incoming message: when it arrives the user is alerted and then once he picks the phone up and tilts it, the message reveals itself bit by bit, in a preview mode. When an angle of 45 degrees is reached, the whole message preview is shown and the revealing feature is a continuous and reversible one, so once the user has seen enough, he can place the BlackBerry back on the table and the message will disappear in the same way it appeared.

The French Toast concept involves the accidental deletion of a message. This feature doesn’t require you to confirm deletion, instead allows you to undo the delete through an alert that stays on the screen for about 3 seconds and then disappears when you do something else. The notification can be placed wherever on the screen. It seems that gestures are a big deal in BB 10 OS, but we already knew that. This platform is starting to sound better and better by the day. 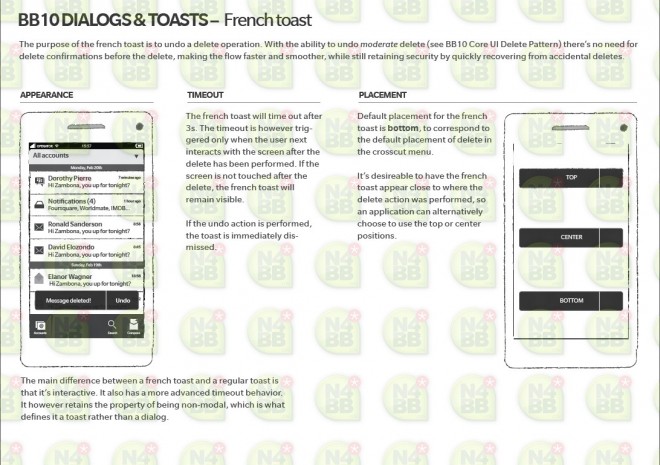