LG’s got a new 3D phone coming, as the follow-up to the Optimus 3D from last year. This model brings pretty much the same specs, but changes the design a bit. This new device, dubbed the Optimus 3D 2 or the 3D Max will debut at Mobile World Congress 2012, at the end of the current month, in Barcelona. 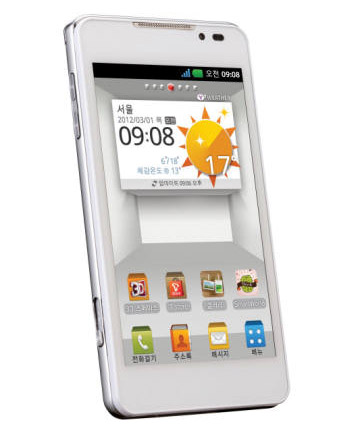 The handset will be launched by SK Telecom in South Korea, where it will be on sale first. We’re dealing here with a 3D smartphone that uses a glasses free 3D display and a case that’s 9.8mm thin and lighter by 20 grams than the first LG Optimus 3D. The handset also brings HDMI, DLNA, a dual 3D 5 megapixel camera, a WVGA NOVA 4.3 inch display, Bluetooth, 8 GB of internal memory and NFC. There’s also HSPA connectivity with a speed of up to 21 Mbps. Previously, this device was codenamed LG CX2, but it’s likely that the name 3D Max will stick.

One thing I didn’t like about the LG Optimus 3D was the battery life, that was very poor, especially when using the 3D gimmicks on the handset. Also, the display’s 3D effects made your eyes and head hurt after a while, so I hope they got that worked out as well.