The LG Optimus F3Q is a sliding QWERTY keyboard handset, that’s pictured below. This model has hit the web via @evleaks and it’s supposed to debut via T-Mobile on January 22nd. That’s the same date as the Xperia Z1S, on the same carrier. 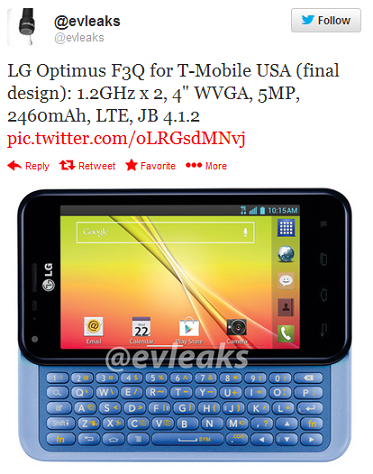 The tweet that made this image public, calls this the final design of the LG Optimus F3Q for T-Mobile. We also found out some of the specs for the device, which, by the way are quite identical to the ones of the LG Optimus F3. We’re dealing with a 4 inch 480 x 800 pixel display, a dual core 1.2 GHz processor and a 5 megapixel camera at the back.

There’s a 2460 mAh battery in the mix, LTE connectivity and Android 4.1.2 as the OS. There’s no pricing mentioned, although this looks like the kind of handset that sells for zero dollars on contract. I wonder if that 5 row QWERTY keyboard is comfortable to use on such a small frame.