LG’s smartphone lineup at MWC 2013 has the chance to be one of the most prolific in years. No less than 7 new devices are expected in Barcelona, spanning to 4 different series. We’ve got the F Series, the Optimus L, the G and the V. Today we catch a glimpse of the F Series, as two new devices get pictured in press renders ahead of their time. 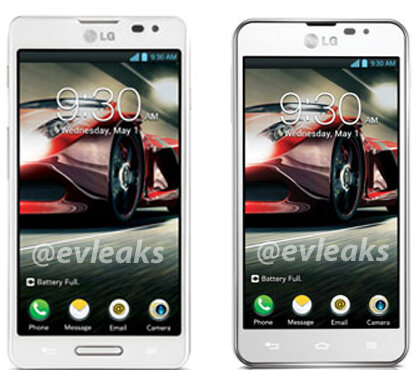 The usual leakster @evleaks is at it again, publishing the pictures of the LG Optimus F7 and F5 a few days ahead of their MWC unveiling. Other newcomers are MWC include the LG Optimus G Pro, that’s basically already announced, but people have yet to receive some hands on quality time with it. The Optimus F7 and F5 pictured here seem like a lower end affair and they both keep their hardware Android buttons, although the F5 opts for capacitive ones.

The G Series from LG should included higher end phablets/smartphones, while the F series seems a lower end L Series and the L includes the already detailed LG Optimus L5 II and L7 II, maybe a few more models. The V Series is the real mystery here, although I have a feeling it’s related to the Optimus Vu.