I know it’s a tad late to review the LG Optimus G, but better later than never, right? This is the Nexus 4 twin brother, one that goes for 159 euro on an Orange contract. It’s also priced at 499 euros without contract. This model was announced back in August 2012 and launched in November. 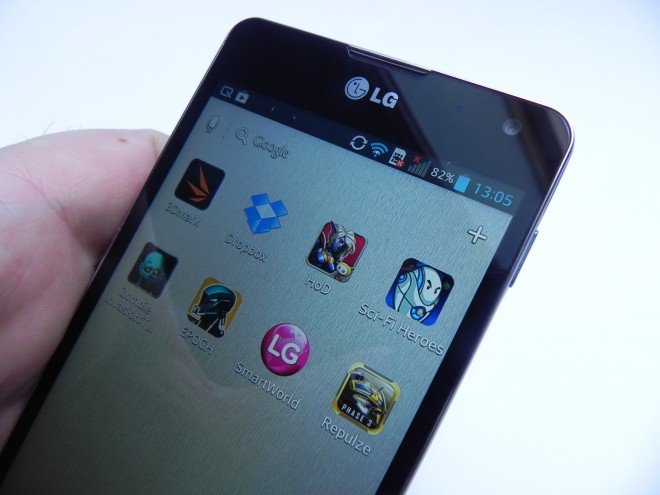 The handset measures 8.5 mm in thickness and weighs 145 grams, plus it has a glass back like the Nexus 4. There’s a dotted texture at the back and we’ve also got a stainless steel frame, a thin one around the handset. The phone is wide, wider than the Galaxy S III and that gives us a wider virtual keyboard. The smartphone is completely flat and without curves, although the corners are slightly rounded.

The bad thing is that the phone rests on the protruding camera mechanism at the back. I liked the small bezels of the screen, that make us feel that the entire facade is all display. As far as hardware goes, the LG Optimus G comes with a True HD IPS+ LCD with a 4.7 inch diagonal and a 1280 x 768 pixel resolution. There’s also Gorilla Glass 2 protection and other specs include Dolby Mobile technology, no card slot (sadly) and 32 GB of storage. 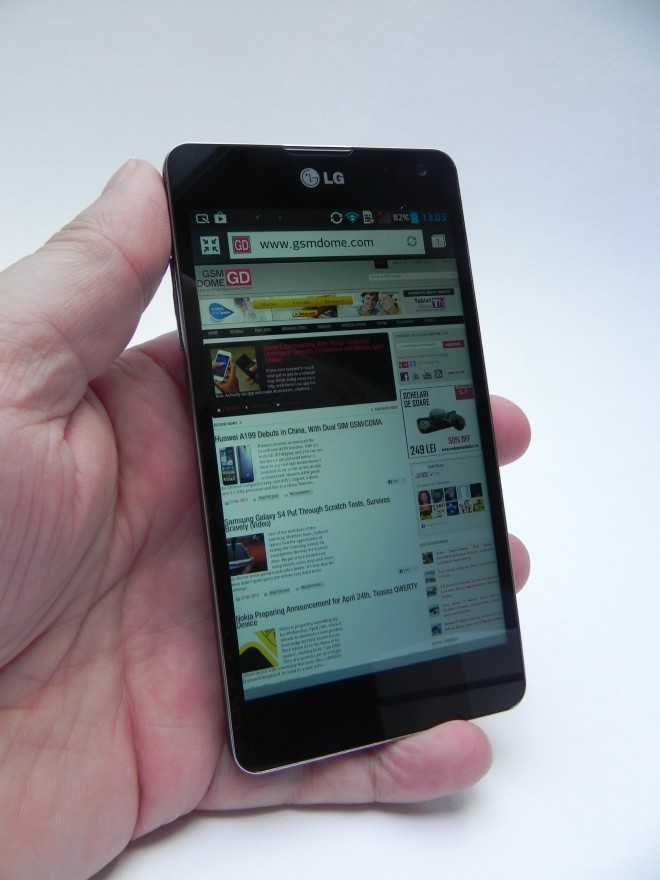 There’s also 2 GB of RAM, a 13 megapixel camera at the back and a 1.3 MP front camera. Inside the LG Optimus G we find a quad core Snapdragon S4 Pro 1.5 GHz processor with Adreno 320 GPU. On the connectivity side we’ve got 4G LTE, HSDPA 42 Mbps, WiFi dual band, DLNA, Bluetooth 4.0, NFC and microUSB 2.0 with MHL. There’s also an accelerometer, gyroscope, proximity sensor, compass, stereo FM radio with RDS, GPS, Glonass. LG Optimus G comes in black or white and it has active noise canceling, for extra crisp sound in calls.

The battery is a non removable Li Polymer 2100 mAh unit, that provides 456 hours of standby time. The talk time is 15 hours of 2G talk time and the battery is the same as the one of the Nexus 4. We got 20 hours of functioning time, which is excellent for a modern smartphone. Eco Mode is a feature that will aid you in properly managing the battery, by alternating between quad core an dual core CPU use. 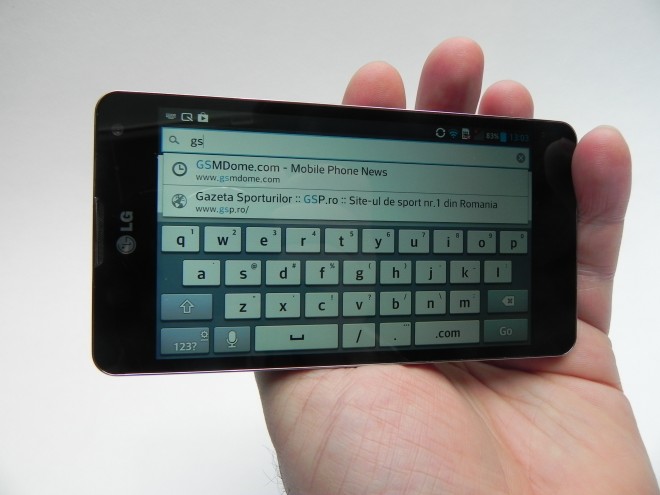 We tested the multimedia abilities of the phone and we were impressed by the excellent design, volume and bass of the headphones. We’ve got good volume on the speaker as well and also good clarity. There’s no distorsion and the music player offers some nifty Dolby settings. The audio is better than on the Xperia Z and Galaxy S3, if you want a comparison.

LG Optimus G also supports HD voice calls, that has great clarity and volume on this model. On the video side, there’s pinch to zoom in videos, Q Slide (sort of a Pop Up Play) and all the goodies are shown on a True HD IPS Plus panel, that looks great. There’s Zero Gap Touch technology, that fuses the LCD panel with the glass, so the pixels seem closer to the surface. 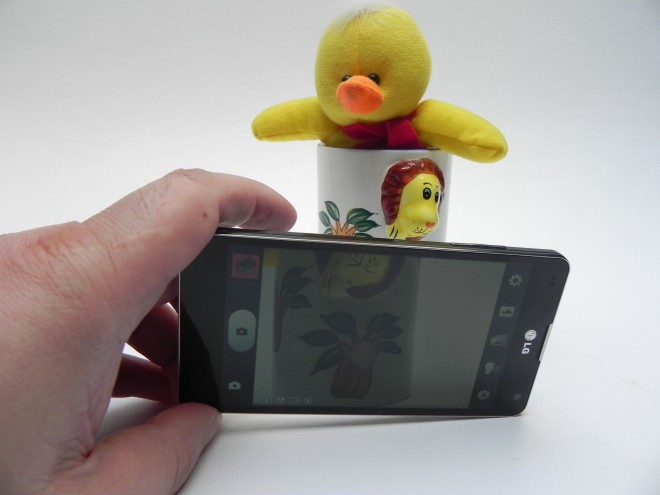 The text shown on the display is crisp, view angles are excellent, brightness is very good, but the colors are slightly exaggerated and oversaturated. Blacks are deep and all famous types of video and audio formats are supported. By the way, Q Slide also supports YouTube videos. LG Optimus G features a 13 megapixel camera with autofocus, LED flash, geotagging, face detection, image stabilization and 1080p video capture at 30 FPS.

We’ve got voice control features, as shown in the video review, so you can say Cheese or Whisky to take a shot for example. There’s also HDR, panorama, burst shots and a ton of settings to play with, including ISO, white balance and many scenes. The pictures are slightly white-ish and colors are oversaturated. I also found that while filming the video with flowers below, colors suddenly changed to their oversaturated version. The brightness of the camera is OK and there’s no noise to spot in the pics.

The quality of video capture is great and when it comes to zoom quality, the LG Optimus G is superior to the Sony Xperia Z. Stabilization is also good and the camera is someplace between the Xperia Z and HTC One X. Moving on to performance, we tested the handset in the usual benchmarks and compared it with the ASUS PadFone 2 and Sony Xperia Z.

These two models feature the same CPU as the LG Optimus G, the Snapdragon S4 Pro quad core CPU. In Quadrant, we scored 7730 points with the LG Optimus G, 8011 with the Xperia Z and 7655 with the ASUS PadFone 2. In AnTutu we scored 18.145 points, passing the Xperia Z and its 16k points. In NenaMark 2, the score was 59.7 FPS, basically the same as on the new Xperia and PadFone 2. 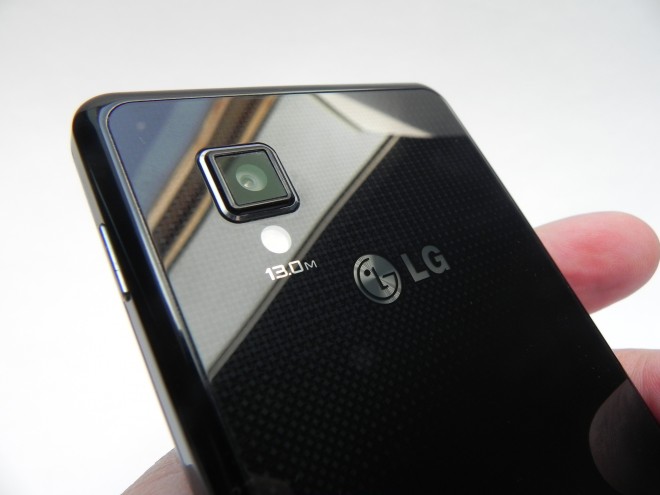 We had an impressive 3D Mark result of about 10.777 points, close to the highest score ever in this benchmark, that’s 11k points. LG Optimus G runs Android 4.1.2 Jelly Bean with the LG Optimus UI 3.0 on top. The notification area features a huge amount of options and toggles, that you can customize. There’s also an area for Q Slide apps, like video, calculator, Internet, memo and calendar.

By the way you can only run two Q Slide apps at the same time on the screen. You can change the pictograms of icons if you want and there are a ton of apps to use here. There’s a backup app, a Dictionary, Notebook for multimedia notes, Smartshare for DLNA and Safety Care to take care of your problems. I also showed you how Quick Translate works in the video and LG Smart World is here with some extra apps and a cute new UI. 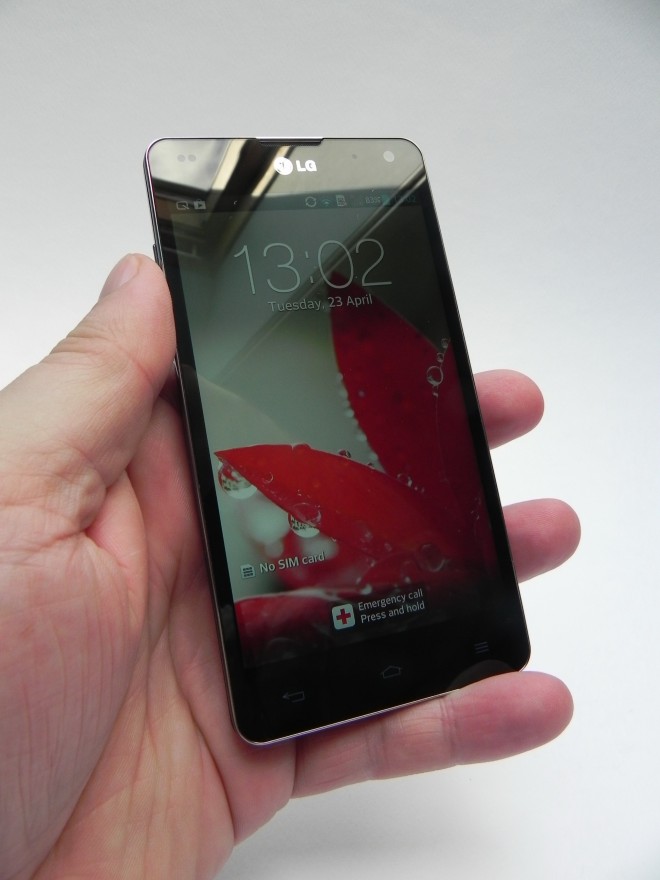 Finally, there’s a feature called Smart Screen, that seems borrowed from Samsung and a bunch of gestures that may also feel familiar. And now it’s time for the verdict.

Here are the Pros of this phone:

Overall, we give this handset an 8.7 out of 10 for design, a 9 for hardware, a 9 for OS and UI, for a total of 8.9 out of 10. It’s still a very good phone, but LG is very close to launching a flagship to follow this unit. The advatange is that its price will probably drop more soon.