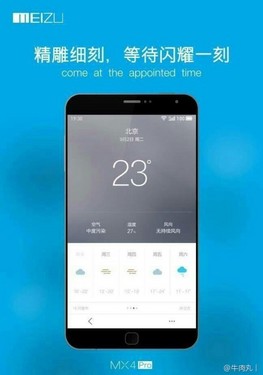 A Chinese producer that is getting ready for the launch of its new flagship right now is Meizu. After in the past few weeks a lot of leaked pictures and specs list of the Meizu MX4 arrived on the web, today we found out that the phone will pack a 5.4-inch Quad HD display and a fingerprint scanner.

Now, thanks to the image above that looks like a press invite, we get to notice that the design of the home key button will use rounded corners. As you may already know, Meizu MX4 will have a fingerprint scanner integrated in the home button. Also, this new flagship phone will pack a front-facing panel with very slim bezels.

Among its other specs we have an octa-core Samsung Exynos 5430 processor, 3 GB of RAM memory, a 20.7-megapixel Sony main camera sensor and 32 GB of internal storage. Is expected that Meizu MX4 to arrive on the market at a $404 price tag.