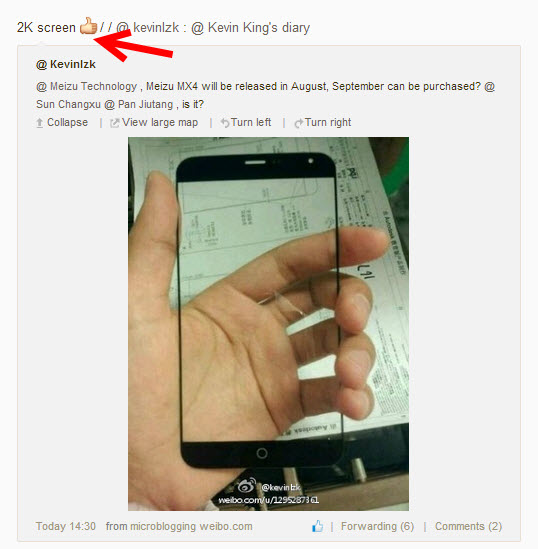 After a couple of days ago we had the opportunity to see some hands-on photos with the front-facing panel of the Meizu MX4 flagship, now through a Weibo post from Kevin Wang, Director of China Services for IHS iSuppli research company we get to know the fact that the next Meizu high-end phone will pack a 5.4-inch Quad HD display and a fingerprint scanner.

With this post we also find out that the phone will offer an octa-core Samsung Exynos 5430 processor, 3 GB of RAM memory and a 20.7-megapixel Sony sensor.  Meizu MX4 will also bring 4G LTE connectivity and Android 4.4 KitKat operating system with the custom interface Flyme 4.0 on top.

As we found out previously, Meizu MX4 is going to have a special anti-fingerprint and anti-scratch coating that will offer a better protection for the device. Among other special features of this device, we also notice the thin bezels that will measure only 1.1 mm in thickness. Is expected that Meizu MX4 to be officially announced in September.