Micromax is a company in India, that just introduced two interesting handsets, one of them sporting the popular phablet format. I’m talking about the Superfone Canvas A100, picture below on the left of the image. It comes with a 5 inch LCD display and Android 4.0 ICS as the OS of choice. The phone supports a modest 854 x 480 pixel resolution, but more about specs after the break. 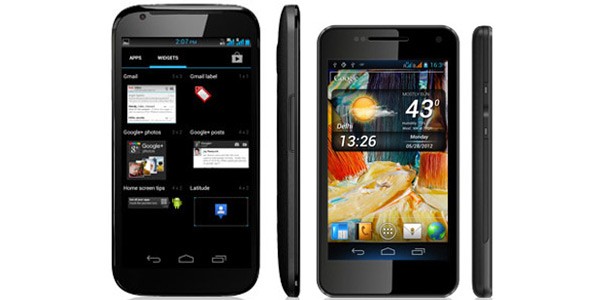 The Canvas A100 incorporates a 5 megapixel camera at the back and a front VGA camera, as well as a dual core 1 GHz processor and 4 GB of built in storage, as well as a microSD card slot. You might have guessed that this is a dual SIM model and you’ve guessed it right. The other newcomer is the Micromax Superfone Pixel A90, with a 4.3 inch 800 x 480 Super AMOLED display.

This one ups the ante with an 8 megapixel rear camera and it has a Siri-like feature called AISHA. We also have the pricing for these two models: the bigger one is priced at $180 off contract, while the smaller one goes for $234. Both are best buys nowadays, unless you want to get your hands on that cool Xiaomi quad core Snapdragon handset, that will come soon enough.