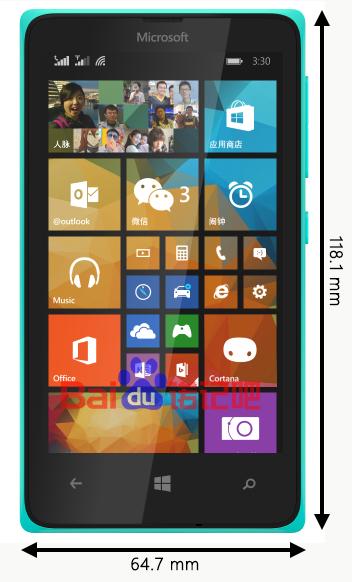 Microsoft Lumia RM-1069 is a name that we’ve heard a couple of days ago, moment when alongside another device named Nokia Lumia RM-1110 received certification from the Vietnamese authorities. Today, through a Chinese publication, we get to know that RM-1069 could be named Microsoft Lumia 330, this one following to be a first model from a new low-end accessible series of devices.

With this information, we also get the chance to take a look on a first image with the product in case, a picture that reveals a device similar to Nokia Lumia 520, thing unveiled by its sizes of 118.1 mm in length, and 64.7 mm in width.

By taking in consideration these sizes, Lumia 330 will arrive with a 4-inch LCD display that will offer a 800 x 480 pixel resolution. Even if the rest of the specs are unknown for the moment, this purposed Lumia 330 doesn’t look bad at all, and if the price will be with 15-20% lower than the actual most accessible device on the market, we could have a new hit.