As usual with CeBIT, Microsoft got a huge stand in hall 4, covered with booths of the company’s partners, providing software solutions based on Microsoft’s software. The Windows Mobile logo could be seen from far and there was even a “Microsoft auto” booth, for automotive software.

The tables with Windows Mobile phones were definitely bigger at CeBIT 2009, when compared to the previous years, proving that the economic depression hasn’t struck the tech world yet. People were very interested with the company’s innovations and the stands were quite crowded, but there was one particular star of the show: Toshiba TG01. 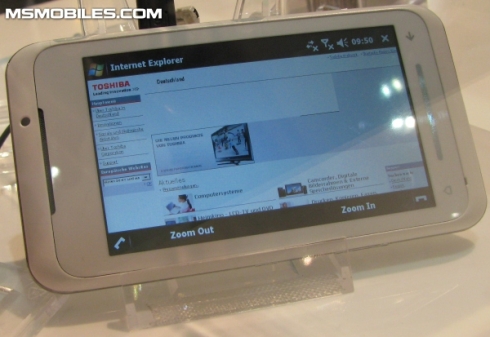 Actually, there were 2 handsets showcased behind glass and out of touch: Asus Garmin Nuvifone M20 (switched off) and Toshiba TG01 (switched on, running WM 6.5). All in all, Microsoft pulled out a neat job at CeBIT, this year, even pleasing the Xbox gamers, who are well targeted by the company’s stands.