If I were Apple, I would start trembling about now, specially because Motorola’s latest Android was recently called the number one gadget of 2009 by Time magazine and now the device gets a 50% Android marketshare. See the chart below, courtesy of getclicky, for some extra details on the handset’s performance on the US market. 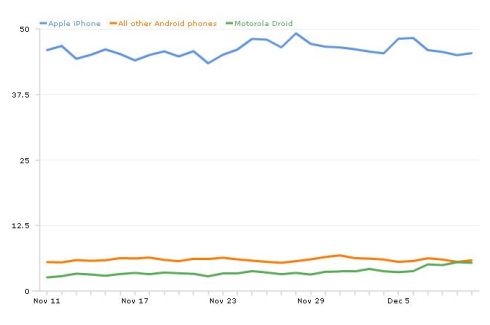 The Orange line stands for “All Android phones”, while the Motorola Droid smartphone is represented by the green line. This means that right now Droid and ALL OTHER Android phones on the US market are equals when it comes to market share, a mere month after the launch of the Motorola handset.

The iPhone is high above on the graph, but give Droid a year or so and it’ll be on par with the Android wonderkid. Imagine what a 4G follow-up for Droid would do.