After a bunch of soak tests for Android 4.0 on the Motorola Droid RAZR, it’s time for another update, this time a firmware  one. Earlier this month Moto was playing with the idea of an ICS update though that soak test, that also involved the Droid RAZR MAXX at some point, but in the end it was pulled. 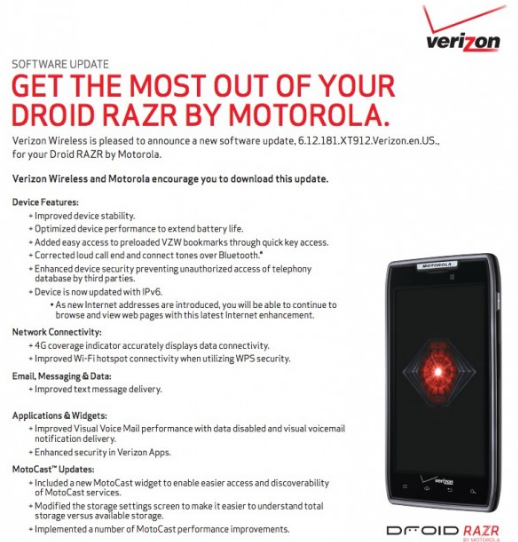 Last week we also saw a soak test for the latest flavour of Gingerbread, but it was only involving a bunch of software fixes. The new update that we found out about today takes care of the Droid RAZR and RAZR MAXX and brings them up to software version 6.12.181, still with Gingerbread 2.3.6 as the main OS. The update takes up 17.4MB and it doesn’t take a long while to install. The software brings better device stability and battery life, better Bluetooth call volume, improved security and IPv6 implementation.

There’s also improved text message delivery, better visual voice mail experience, a bug fix for the HotSpots with WPS security and more accurate 4G connectivity icon. You’ll also notice some changes to the MotoCast applications. Hopefully, Ice Cream Sandwich will also arrive soon enough and for now remember to install OTA RootKeeper and backup everything before you update. OTA RootKeep has the role of restoring the root and restarting the phone even after the update. 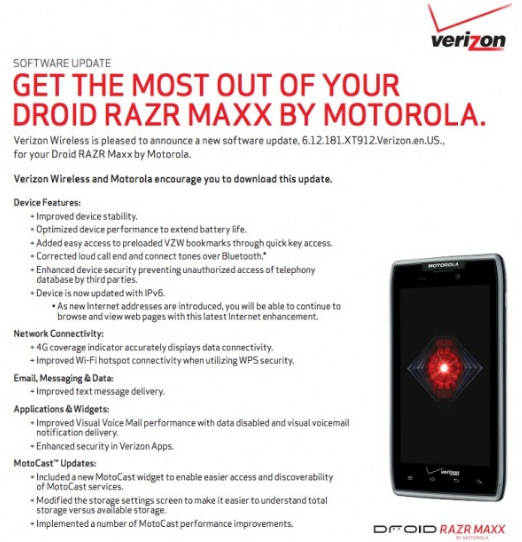