It has come to this: the duel of the giants. While everyone’s criticizing the iPhone 4 for its defects, we find the time to see the good in other handsets. Thus, we’ll have a closer look at IntoMobile’s comparison between the Verizon Motorola Droid X and Sprint HTC EVO 4G. 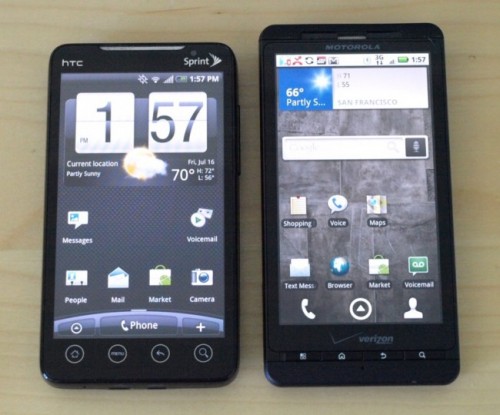 If you’re all about Android OS, big diagonal screens and top notch features, you’ll love both devices, but one’s got to win the duel, right? Both phones feature a 4.3 inch display and 1GHz processor, plus they come with HDMI out ports, supporting video streaming to a TV/monitor in 720p HD resolution. Similarities continue, with an 8 megapixel camera that performs great on both units.

As far as differences are concerned, Droid X is a larger handset and also thinner than the EVO, plus taller. Another design difference is the presence of physical navigation controls on Droid X’s front face, while the HTC phone relies on touch sensitive buttons. A drawback for the Droid X is the fact that its buttons have a tendency to wiggle a bit, so that’s a minus in build quality.

Also, the feel of the phones is different, with the X feeling “rubbery” and the EVO felling “spongy”, in spite of both handsets being covered in a soft touch rubberized finish. Software-wise, we learn that the phones rely on Android OS, one with MOTOBLUR UI and the other with HTC Sense. Find out which the aspects that really make a difference are from the video below: