Over the past week or so we’ve had the opportunity of testing the Motorola Moto G dual SIM handset, a device that’s considered by many a cheaper Moto X. This model is a 4.5 inch handset with a pure Android experience and a price tag of $179 in USA (at least the single SIM 8 GB version). This product was launched in November and gets reviewed in the following lines. 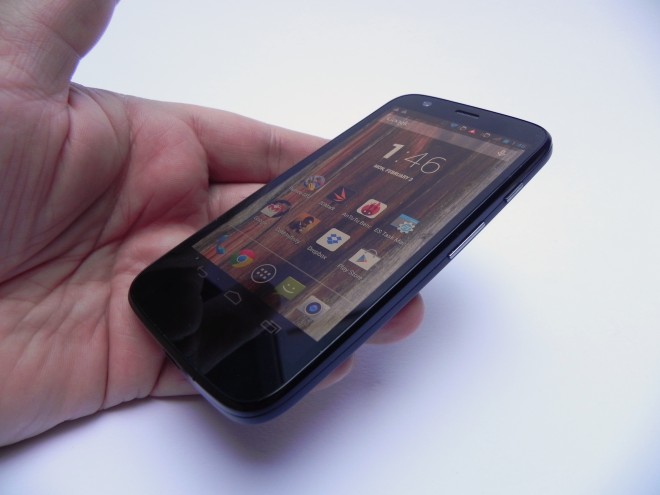 The handset features interchangeable back covers, available in a variety of colors and as you can see in the video, the removal of the back case is done starting from the microUSB area. This device is quite bulky, since it measures 11.6 mm in thickness and weighs 143 grams. It has nice proportions, so it sits well in the user’s hand and offers a solid grip.

It also offers good one hand use and seems pretty resilient to the day to day use. The replaceable back panel is priced at about 10 euros and if we have a gander at the design, we find side buttons that seem metallic and have good feedback. There’s a microUSB port at the bottom, camera and flash at the back, as well as speaker and at the top an audio jack and mic. 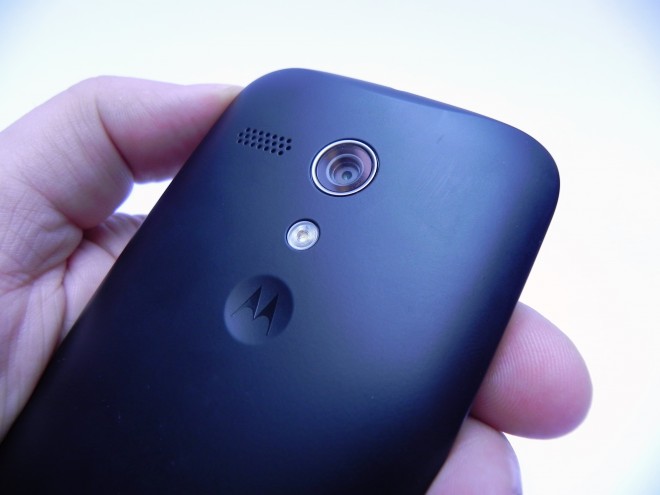 Upfront there’s a camera, earpiece and notification LED. Overall this looks like a fat Nexus 4 and moving on to the hardware specs, the Moto G packs a 4.5 inch IPS LCD panel with 720p resolution and 326 ppi density. Under the hood we’ve got a quad core Snapdragon 400 1.2 GHz CPU, a Cortex A7 with an Adreno 305 GPU.

On the storage side there’s 8/16 GB of storage and no microSD. Moto G offers 1 GB of RAM, a 5 megapixel back camera and a 1.3 megapixel front shooter. The connectivity involves quad band GSM/GPRS/EDGE connectivity, WiFi, GPS, Glonass, microUSB, Bluetooth 4.0 and HSDPA with 21 Mbps download speed. The OS here is Android 4.3, in a stock version. Other features include ambient light sensor, accelerometer, proximity sensor, active noise cancelling, a dedicated microphone, compass and FM radio. 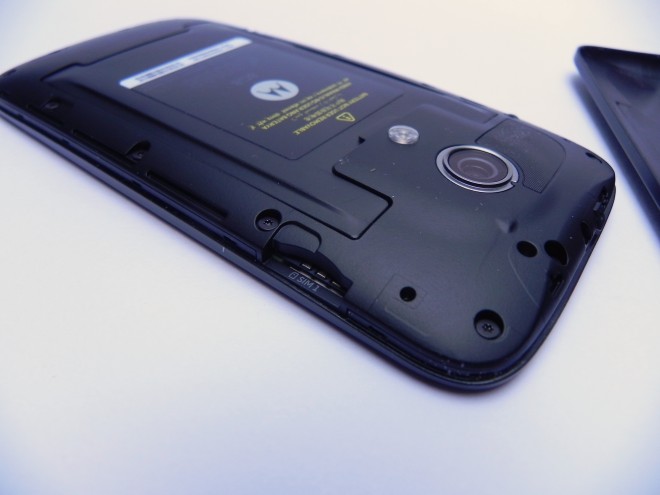 The battery of the handset is a Li-Ion unit with a capacity of 2070 mAh. On paper the battery offers 24 hours of talk time, while in our tests, that involved 50% brightness and WiFi on, we achieved 6 hours and 50 minutes of video playback. This is excellent, especially considering the Nexus 5 offers 4-5 hours of playback. By the way, the battery charges in 3 hours and 40 minutes, which is kind of a lot.

On the audio side, we’ve got a loud speaker, decent bass and an equalizer to be found in the settings. The headset also triggers a few more EQ settings, like 3D effect and bass boost. There’s also FM radio available here and a very high headphone volume is achieved, as well as clear sound. The voice is warm and the headphones are comfy, although they look cheap. 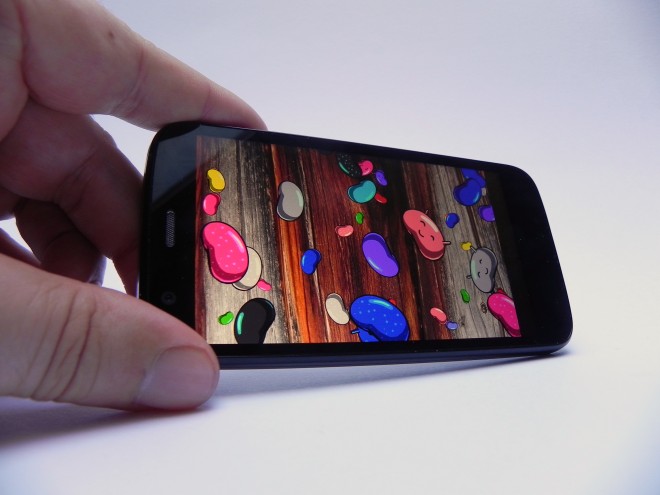 As far as video goes, there’s a 4.5 inch HD screen upfront, with an IPS LCD panel and 326 ppi pixel density. We’ve got good contrast, nice colors and very wide viewing angles. Whites and blacks are good and the screen has good sunlight behaviour. The screen reached 334 lux units and offers RGB Stripe pixels, which is a pretty good brightness and certainly better than the one of the Galaxy S4 Mini.

Moving on to the camera, we get a 5 megapixel shooter here, with a minimalistic UI, involving a half circle on the side of the screen. You need to press on the screen to take a picture and the semicircular area features options such as HDR, flash, focus plus exposure, slow mo video, panorama, aspect ratio and geotag. The focus plus exposure thing triggers a viewfinder that you can move on the screen in order to adjust both functions at the same time. 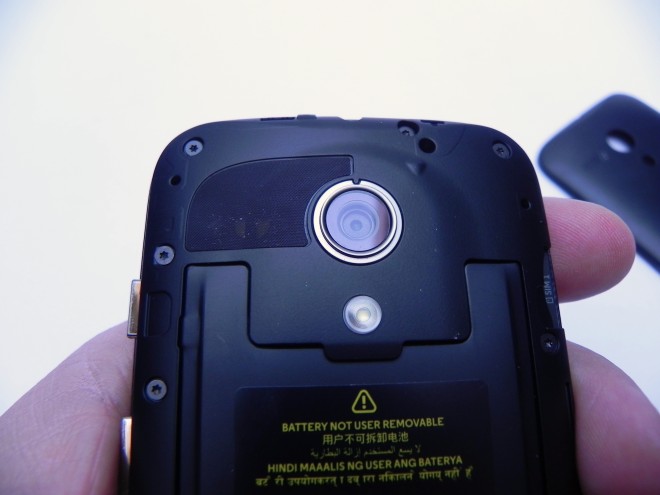 Zoom in and out is done with swipes on the screen and the first thing I noticed about this camera is its not so good focus. When you use the focus and exposure option, you’ll see that the exposure is also off a bit. The good news is that the camera is pretty fast and the HDR is pretty good. The camera creates a ton of noise indoors, especially when filming, but the flash sometimes does a good job.

Moto G’s cam features a 1/4 inch sensor (CMOS), with 1.4 micron pixels and F/2.4 aperture. Because of the focus problems, macros are very hard to take, but at least the outdoor pics are pretty clear and colors are realistic. Once again using the special option mentioned above messes with both the focus and exposure. 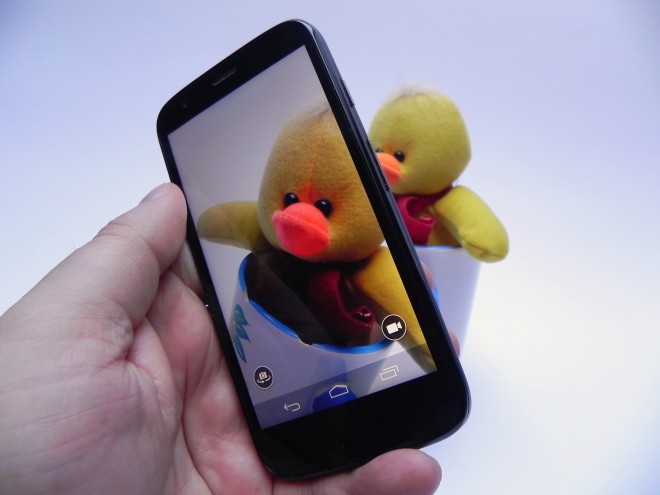 As far as video goes, slow mo looks very nice, but it’s slightly noisy. The max capture you can do is 720p 30 FPS with a 10 Mbps bitrate. The audio is stereo and has a bit rate of 128 Kbps. I was impressed by the video capture, especially considering I was basically filming during a blizzard. Also, for some reason, the videos have good exposure.

Other good camera aspects are the panorama, colours and low light samples taken in some situations (winter, outdoors). If some update fixes the focus, then the camera becomes better. The default web browser here is Chrome, that is reasonably fast and the keyboard input uses gesture typing, that resembles Swype a lot. 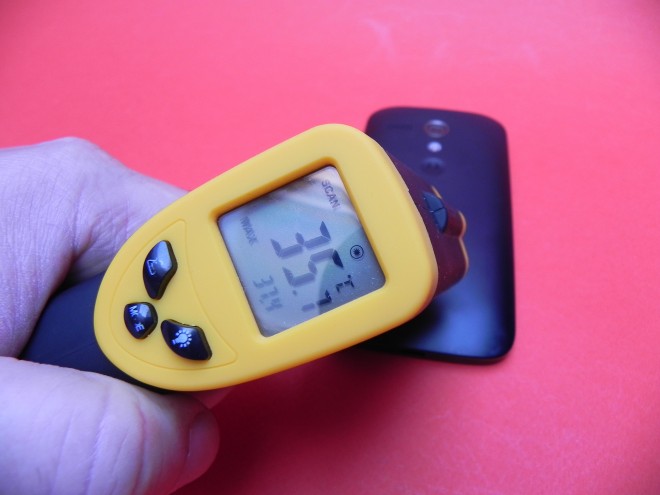 As far as performance tests go, we put the device to the test, by playing Riptide GP2 for 15 minutes and reached 37.4 degrees Celsius, which is OK, since the handset doesn’t get hot. And now the benchmarks! We compared the Moto G dual SIM with the Samsung Galaxy S4 Mini and HTC One Mini, because their price may be a bit higher, but the performance isn’t! 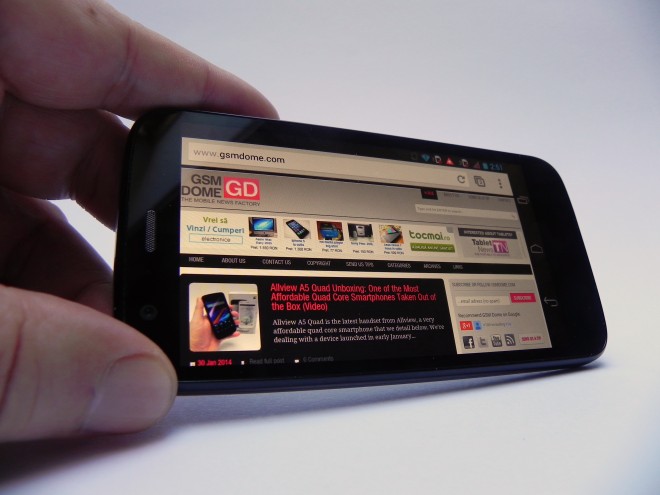 Overall, the Moto G is better than the S4 Mini and HTC One Mini, in benchmarks at least. Moving on the OS, we’ve got Android 4.3 stock here, with a very fluid functioning and no lag at all. Google Now is accessible from the lockscreen and we’ve got a do not disturb feature on the handset, through the Assist ap. Google Now can schedule meetings and show your football scores of your favourite team, as well as call a contact.

Speaking of calling, calls are loud and clear, thanks to the noise cancelling and the dual SIM settings are available here, as shown in the video below. This is a dual SIM dual standby handset, with 3G available on both SIMs, as far as I know. Don’t expect much of an app list here, since we’ve got the standard Google package, including Google Drive with 50 GB of cloud storage, Calendar, Gmail, Google Maps, Google+ and Hangouts. There’s Moto Care and Migrate, plus the Play Suite and Quick Office.

And now for the verdict…

Here are the Pros of the handset: