LG debuted the L series of handsets last week and only got to showcase it this week during MWC in Barcelona. We’re dealing here with a bunch of affordable devices, actually 3 of them, that make out the L series: LG Optimus L3, L5 and L7. We’re here today to check out the L5, that’s a balanced midrange offer from the South Korean company. 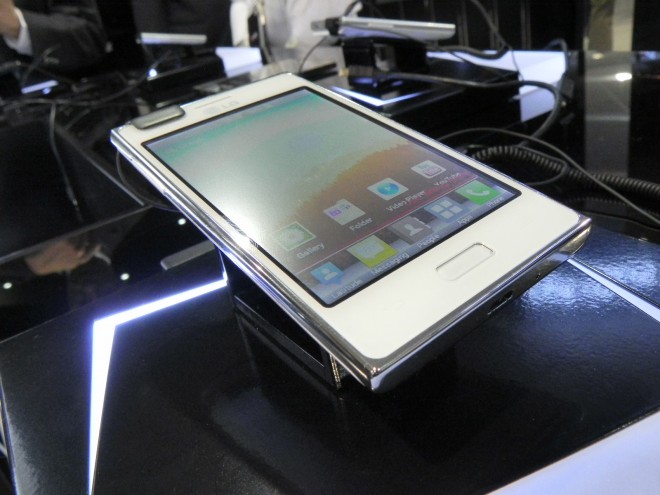 The device has straight edges and a design language similar to the one of the Optimus Vu and the LG Optimus LTE Tag. There’s a plastic case here with a metallic edge, for an extra bit of class. Most of the phone is made of plastic, but still the L5 feels solid in the user’s hand and even sturdy enough. LG added the 3.0 UI on top of Android 4.0, but it’s kept the OS quite pure, without tweaking it too much. And if it’s hardware you’re looking for, then check out this specs list:

The L5 supports VGA video capture, that’s a bit underwhelming if you ask me. The LG Optimus L5 will come to the UK in Q3 and speculations say it might have a 200 quid price tag. A customization I noticed immediately was the tab Downloads, next to the Widgets and Apps one, that’s actually useful. Other things LG added to the Android 4.0 are a bunch of transitions and effects in the menus. It’s interesting how a midrange phone for LG is this one with 800 MHz of CPU power, while HTC defines that through a 1.5GHz model…