Samsung Galaxy Note finally has a decent rival, the 5 inch LG Optimus Vu, that was announced a week ago. This square-ish unit has the advantage of an unique format, since its display has a 4:3 aspect ratio. Also, it appears that this is the thinnest LTE device in its range of products. And now we offer you some hands on time with this big fellow, in the following pics and video. 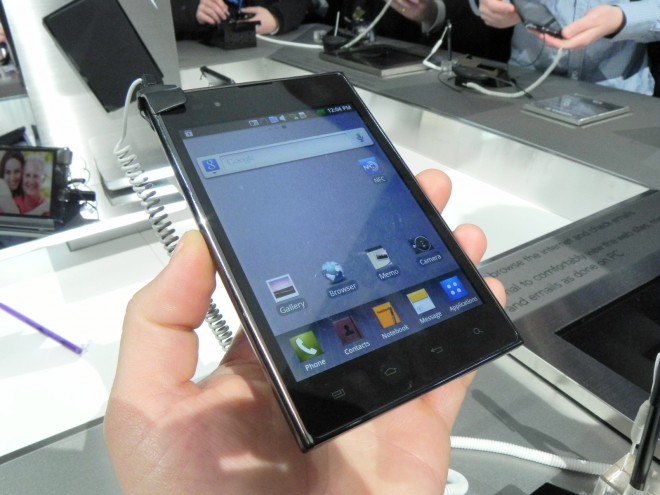 LG representatives at the booth at MWC 2012 called this a way of redesigning the digital notebook and e-reader. The device comes with a capacitive pen (no pressure sensitivity), but the stylus won’t be inserted in a slot, since the device doesn’t have one. For now Vu runs Android 2.3 Gingerbread, but it has promised an update to Android 4.0 ASAP (June or July said the officials). The product is already shipping in Korea and will come to the USA in Q3 this year. Here are the specs:

In the video below we’re shown the ability of note taking that this unit has, the photo integration into notes and the interaction with the stylus. You can also edit photos, crop them, integrate them into notes, basically everything you did with the Galaxy Note is available here, but with a lower resolution. The 4:3 aspect ratio gives some great e-reading, since it eliminates “dead area” on the screen, which is great. More info in the video preview: