LG Optimus G Pro is a 5.5 inch 1080p display phablet, one that makes the Nexus 4 pale in comparison and a very promising piece of machinery. We had the chance to have some quality time with the device during MWC 2013, taking place in Barcelona this week. At the LG booth we got a demo of the software features of the device and we were very impressed. 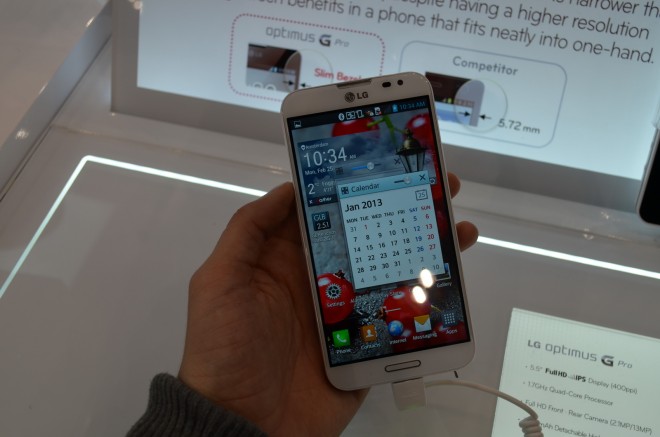 This device features a 13 megapixel camera, 2 GB of RAM, 32 GB of storage, a microSD card slot and a quad core Snapdragon 600 processor. In the video below you can see a Pop Up Play-style feature in action, that minimizes a video window, that you can move on the screen and even make it transparent. You can also use the QSlide feature to run up to 3 apps on the display at the same time. We were particularly stunned by a feature called Audio Zoom, that allows you to film a certain group of persons and pick only one voice from the group.

There’s also a video capture mode where you can also record the face of the user that is filming in order to spot his reaction. The device also impressed us with the clarity of the screen and how bright it was. We’re dealing with a True HD IPS+ LCD and in case you’re wondering, the device has a 13 MP cam at the back, doing 1080p video capture. This model runs Android 4.1.2 and we can’t wait to see it in stores in Q2.