We were fascinated by a mysterious T-swivel handset last week, only to discover, a couple of days later that it’s supposed to the Palm Roteo, a prototype handset. After this story seemed to become less appealing to bloggers, Pocketables and Engadget Mobile did some digging and found out more stuff about the phone… 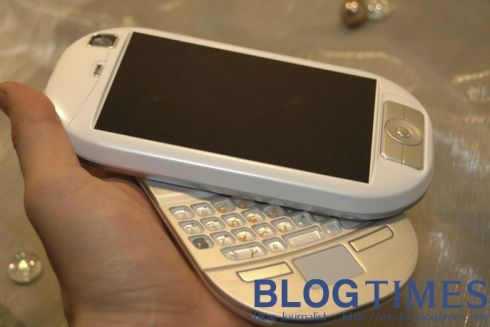 Turns out that its first photos were take during Computex 2008 and that the handset is manufactured by Compal, a Taiwanese company. Of course, the T-swivel cellphone remains a prototype, codenamed Tabasco, but it might still hit the Palm lineup for 2009. Tabasco uses a pretty big display (4.5 to 5 inches) and comes with a 3.5 megapixel camera with rear flash, all of those in a 6.3 x 3.3 x 1.4 inches case.

Palm has worked with Compal before, ordering no less than 5 million units from them this summer, which many have claimed to be Windows Mobile devices. All in all, Tabasco seems more like a MID to us, than the average smartphone with a hot form factor, but we’ll probably get a better answer at CES 2009.