Japanese carrier NTT DoCoMo is having a busy day, so after unveiling the LG Optimus G Pro, now they go ahead and announce another interesting device, the NEC Medias W. This is a dual display folding smartphone with two 4.3 inch screens, as shown in the picture below. 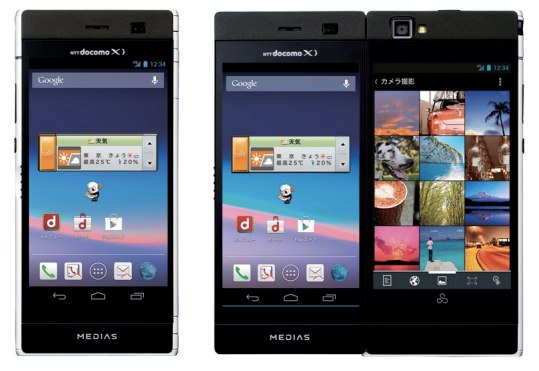 The full name of the product is actually Medias W N-05E and this unit was spotted as a hollow mockup at MWC 2012, only now getting turned into a real device. The handset has LTE and a pair of 4.3 inch LCD screens, each with 540 x 960 pixel resolution. There’s also a 1.5 GHz dual core CPU in the mix, 1 GB of RAM, an 8 megapixel camera, 16 GB of built in storage and a microSDHC card slot.

When you open up the device, it will offer 5.6 inches in total diagonal estate and up to 64 mm in width when shut. The dual screen phone allows you to use its displays either independently in the apps or together, as one big screen. Strangely enough, this Jelly Bean-based smartphone leaves out NFC and TV tuner functionality, that we were accustomed to in Japan. Expect an April debut for this model.