NEC has just showcased a trio of Android 4.0 LTE handsets, that will be demoed at MWC 2012, in Barcelona. These models were shown in Japan and they’ll probably stay there for a while. NEC is a brand that usually confines itself to the local market. 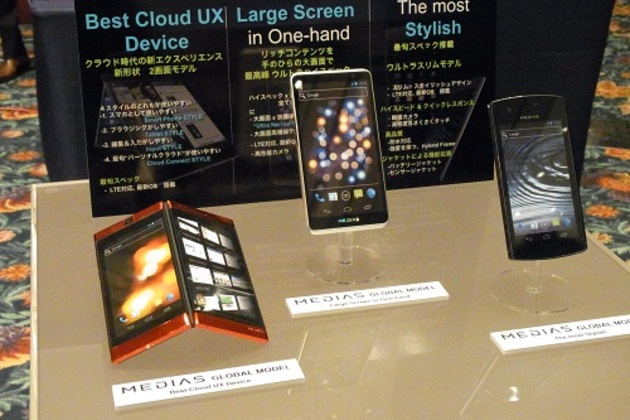 From left to right, in the image above we have the “Best Cloud Device”, that’s a cloud-based LTE phone with the latest Android 4.0 and an unusual design. This one looks like the Sony Tablet P, except that the screens are on the outside when folded. The smartphone turns into sort of a tablet, expanding the browsing area.

The device is said to have a big battery, in order to power these screens. The model in the middle is called the “large screen in one hand”, so it’s a big display smartphone with a high resolution and an ultra thin design (ultra narrow edge structure bezel). Finally, the rightmost handset is a very stylish device, with a fast activating camera, water resistance and expandable functionality with addition of a special jacket.