We’re only two days away from the big unveiling of the Nokia Lumia 1020, previously known as the EOS or Elvis. The handset has leaked yet again today, in what seem to be press renders, showing the device in yellow, white and black. 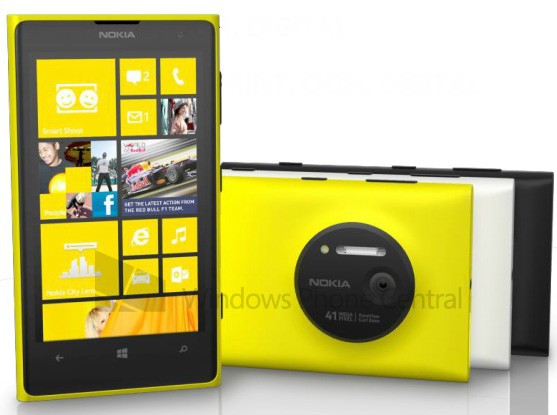 This Pureview phone is expected to pack a 41 megapixel camera, with a Xenon and LED flash, a massive camera sensor and it will also have a special optional camera grip accessory, priced at $70. The new details that surfaced regarding the Lumia 1020 mention an optical image stabilization system built in and the ability to take an image in a 32 MP and 5 MP res at the same time in 16:9.

You can also shoot 38 MP in 4:3 and the 5 MP image mentioned before is basically an oversampled one with 7 pixels turned into one super pixel. The leak also claims that we’ll get 2 GB of RAM, 32 GB of internal storage, Windows Phone 8, FM radio and NFC. Optional wireless charging will be available via a backplate and the large camera sensor will offer F2.2 aperture.