The Nokia Lumia 520 is the kind of device that we review “better later than never”, because it has a very good price. It’s probably the best selling Windows Phone 8 device of 2013 and a true hit. This review will reveal if it’s worth the money or not. 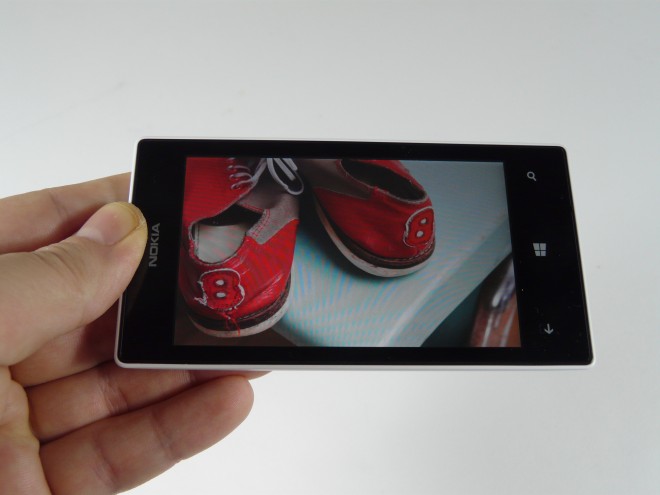 On the Microsoft Store you can find the product priced at $59, which is a crazy good deal. This handset was announced in February last  year and launched in April, but it still stands the test of time. It measures 9.9 mm in thickness, weighs 124 grams and has slightly sloped edges. The good thing here is that the case of the phone is matter and not glossy and the grip is very good.

It also offers good one hand use, a removable case and the option to buy new differently colored back cases. Be careful not to lose the buttons of the handset, once you remove the back cover, though. By the way you will need to remove the battery in order to access the microSD and microSIM card slots. This phone has a solid build, its buttons offer a good feedback and the design is nice overall, especially since it’s slightly different from the typical Fabula design. 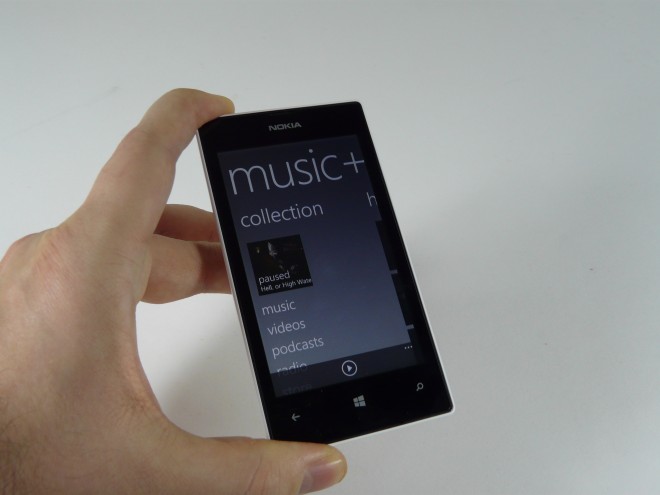 Moving on to the specs, the Nokia Lumia 520 provides a 4 inch IPS LCD display, with a 480 x 800 pixel resolution, a dual core Qualcomm MSM8227 1 GHz processor, an Adreno 305 GPU and 8 GB of storage. There’s also a microSD card slot on board, as well as 512 MB of RAM, a 5 megapixel back camera and no front camera whatsoever. On the connectivity side we’ve got quad band GSM/GPRS/EDGE, HSDPA with 21 Mbps download speed, WiFi, GPS, Glonass and Bluetooth.

There’s an accelerometer available here, FM radio, a proximity sensor and the battery is a Li-Ion 1430 mAh unit, that on paper provides 61 hours of music playbacks or 14 hours of talk time. In our test, that involves HD video playback with WiFi on and brightness on medium, we achieved 3 hours and a half of playback, which is pretty decent. 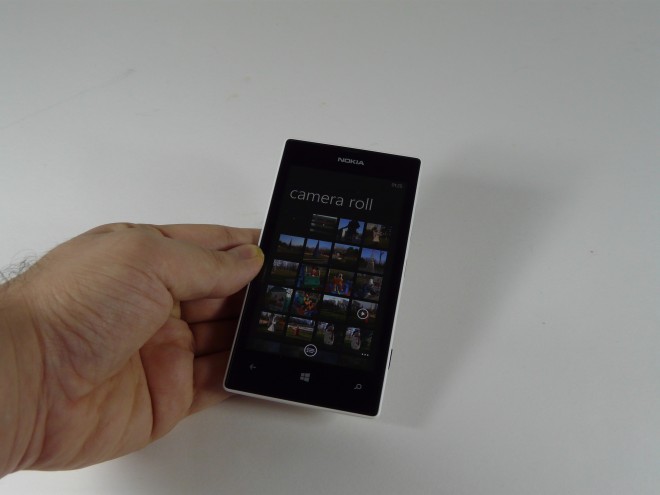 We’ve also got a power saving option and the battery charges in 2 hours, which is also OK. Overall the battery is pretty good and when using the phone moderately I even achieved 2 days of usage, without too much WiFi, though. Moving on to the audio, the speaker quality is quite good, volume is loud and the Lumia 520 is actually pretty impressive for an affordable phone.

The headphones look and feel cheap, plus they’re slightly uncomfortable in the ear, but the acoustics are nice. There’s no equalizer here, but I’m still very impressed by the audio experience, good voices and loud volume, plus FM Radio is always a plus. Analyzing the video experience, we found that there’s no ClearBlack technology here, the contrast is poor and the vivid colors make the experience oversaturated. 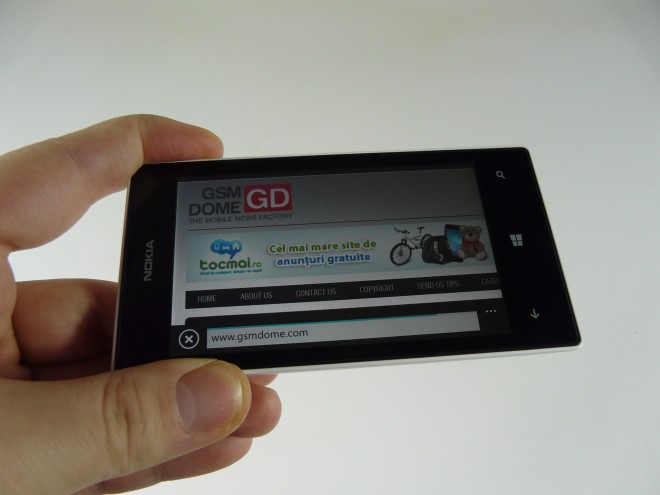 The view angles are good horizontally, but not so much vertically. Clarity is also good and there’s a slight bug here, that I noticed: the backlight stays on sometimes after the screen is turned off. In the settings area you will be able to improve screen readability and the color profile option will allow you to get rid of oversaturation. Overall, the screen is decent, but nothing more than that.

Getting to the camera, this 5 megapixel unit comes with autofocus and a 1/4 inch sensor size. The cam does 720p video, it has no flash and offers 4X zoom. There’s a 28 mm focal length and the same old UI we’ve known for a while. The UI includes options like Scenes (close up and night), ISO, exposure, white balance and aspect ratio. 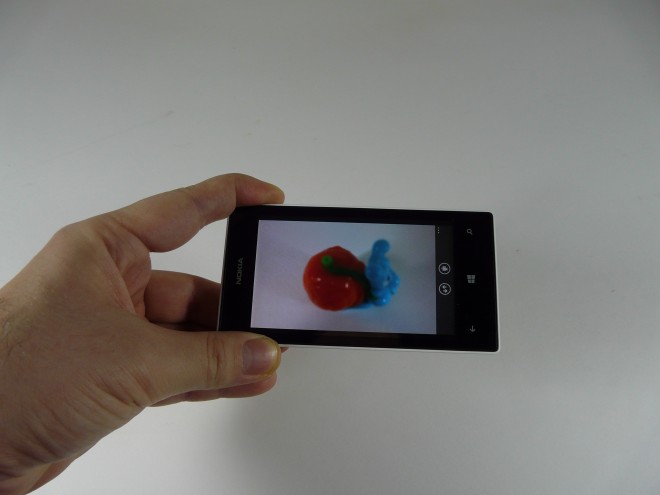 The video options also include white balance, continuous focus and resolution. The Lenses system is in place with a few new features as well. The bad thing about the camera is that it’s pretty slow and it takes a while to take a pic. We’ve also got the Smart Shoot app available, taking a successive series of shots and allowing you to pick the best image, best face and remove moving objects.

I have to say that closeups look nice, the panorama also looks OK and the colors of the pics are quite good. There’s a slight noise present in the pics, that was expected especially in situations when you could have used a flash. We also used the Cinemagraph Lens, that allows you to animate a part of a picture  and if I have to draw a line, the pictures look nice for the price. 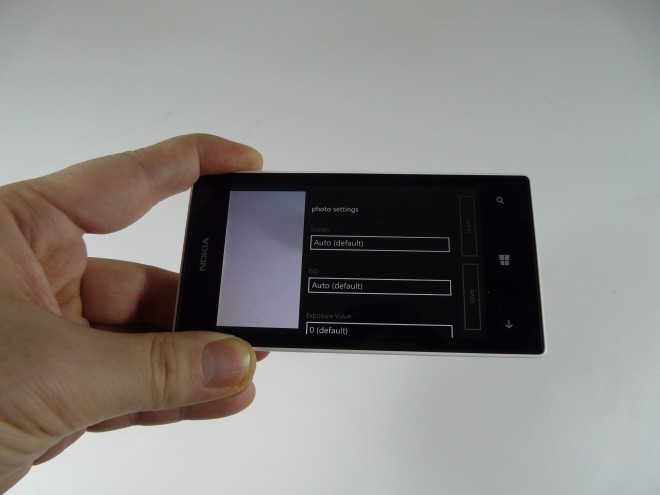 As far as video goes, they look decent, the bitrate is 10 Mbps and the filming is done at 30 FPS, with mono sound. The level of detail is not that good, but I like the way the camera sets its exposure, for both the pics and videos. Overall, it’s a very nice camera, so no objection here. Since this is a phone in the end, let’s discuss phone calling abilities.

Nokia Lumia 520 offers good signal, nice volume and decent noise canceling. The web browser is not very fast, but we can handle it for casual browsing. It supports pinch to zoom and moving to the performance area, we decided to compare this unit with several other WP8 devices. In AnTuTu we scored 7236 points, beating the HTC 8S and its 6658 points, but we got beaten by the Lumia 920, with its 10k points. 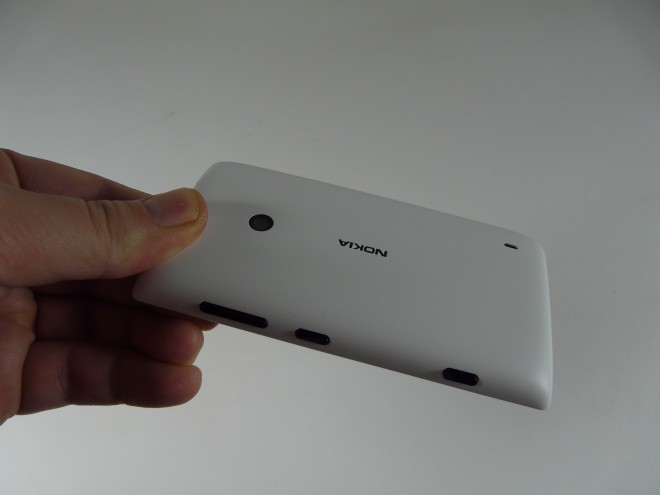 In BrowserMark 2.0 we scored 1431 points, getting beaten by the Lumia 820 with 300 points and by the HTC 8S with 40 points. Finally in WPBench we scored 176 points, very close to the Lumia 720’s score of 179 points. I don’t exactly intend to insist on the list of apps here, since it’s the usual one you get on all Windows Phone devices. It includes Nokia Here Drive, with free lifetime navigation with voice guidance and the whole series of options needed, including economic routes and such.

We’ve also got HERE Maps, Windows Phone Store, Nokia Creative Studio for pic editing and Office preinstalled, allowing you to tinker with Word Docs, Excel sheets or Powerpoint projects. OK, with that said and done let’s go to the Pros and Cons.