The Nokia Lumia Icon is a handset that has yet to be announced, but still it has managed to somehow appear on Verizon’s website. If this is a mistake or not we have no idea, but right now we’ve got a placeholder showing a price. 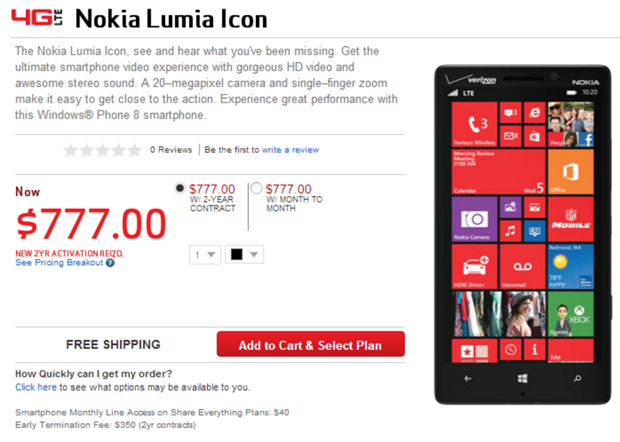 The handset is priced at $777, but it will probably be launched at $100 or $200. The site confirms specs like a 2.2 GHz quad core processor, a 20 megapixel camera and a 2420 mAh battery. The Icon will ship with wireless charging, unlike the Lumia 1520 from AT&T. Last I heard the Icon was in fact the Nokia Lumia 929, a device that has been rumored for a few months already.

It’s said to come with a 5 inch 1080p screen and it seems to be a smaller version of the 6 inch Lumia 1520. We’ll have to wait and see if this is US only material, or if it comes internationally as well. It’s expected to have 2 GB of RAM, 32 GB of storage and dual LED flash, as well as aluminum frame.