Nokia Software Updater now offers the N82 owners a chance to update their devices to firmware v31.0.016. The software takes up 118MB storage space and you should backup, before starting the update, in spite of the fact that N82 features UDP. 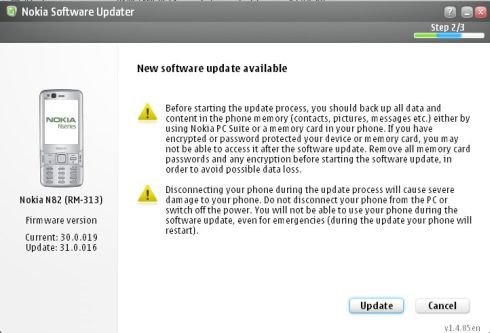 One of the guys from allaboutsymbian updated his device and found a couple of problems with this update, like Nokia Maps, that keeps misbehaving and hanging after launching. The reason for this issue seems to be a bug in the software, that doesn’t allow Nokia Maps to work unless you use a working SIM and data connection (not WiFi) the first time the app starts.

You should be able to solve this by using a 3G connexion and a valid SIM, both of which should be available for most users. Turns out that the editor testing the update used a zero credit SIM and WiFi.

Also, the guy from allaboutsymbian reports that Mobitubia is behaving strangely, but you can blame this either on some internal damage of the N82 he used or on YouTube and their changing formats.