In case you have no idea what this model is about, know that the Nokia N950 is the developer edition of the N9 with QWERTY keyboard, as some people have called the device. Imagine a combo between the Nokia E7 and the N9 and you get the N950, that’s shown below in action, running the latest flavor of MeeGo, updated to PR 1.2. 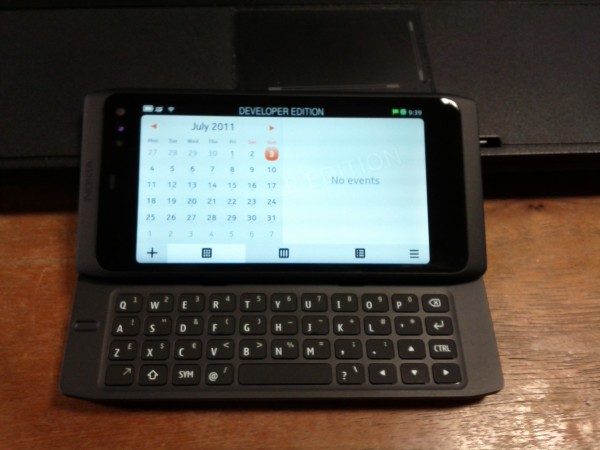 One thing to mention is that the videos are in German, so you’re better off with watching and not hearing, that unless you know German. What this software update brings (among others) is a bunch of new lockscreen features, better Twitter integration, a change of the calendar icon bug that plagued even Symbian (they always show erroneous dates), auto face detection in camera and gallery and a bunch more. Other feats include a landscape oriented launcher, a threaded email, Dropbox sync in account apps and copy/paste in the browser.

There’s also the option of using LED backlight when recording video, there’s a video editor available, media sharing panel in “menu” and a rotatable map canvas using the internal compass. Of course, people who are very familiar with MeeGo might spot some functions that were already available in the OS and didn’t come with this update, so feel free to correct us, especially since we don’t know German. There’s also a second video below, showing the use of folders in MeeGo, something that I always liked about modern software platforms.