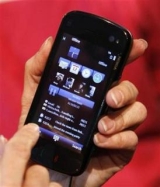 Nokia is holding a conference as we speak, right now, in London and among the discussed topics there’s the one of free maps, on the company’s cellphones. The San Francisco Chronicle reports that the Finnish handset maker will offer free maps on its handsets, competing with Google’s similar service.

As you might already known, Nokia charged cash for navigation packages that included turn-by-turn directions, but now you can get this solution for free, covering 74 countries in 46 languages. A move towards the evolution of its navigational services was Nokia’s purchase of the digital mapping firm Navteq, back in 2008, for $8.1 billion.

The new service offer provided by the Finns will surely help them sell more handsets, just as they lost a bit of market share to Apple and RIM in the last years. Google was already providing free navigation on Motorola Droid in the NA market from late 2009, so Nokia had to play the game in the same way.

This decision will seriously hurt big navigation players like TomTom and Garmin, specially since free nav will be provided on around 20 million smartphones, replacing any other device of this kind. The thing is that Nokia will lose an important revenue stream (one third of $2.84 billion), but they’ll probably find a way to make up for the loss, by selling more phones.