Nokia has an Ovi-related press conference coming on Thursday morning in London, on January 21st, as they get ready to unveil the next generation of their service. The invite is pictured below and mentions the presence of Nokia executive VP Anssi Vanjoki, so the event must be pretty big. 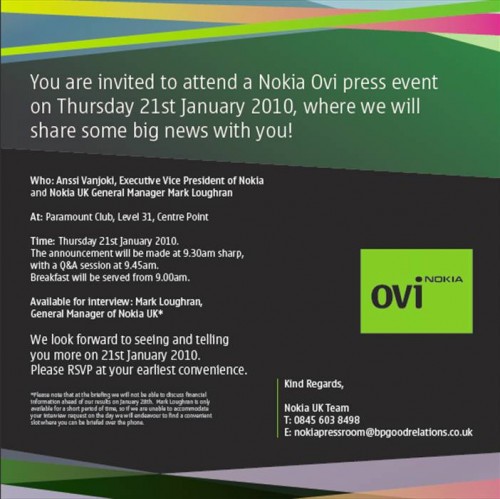 Speculations claim that we’ll see the second generation version of the Ovi Store, talked about in an interview held by mobile-ent.biz back in December. VP of product, media Georde Linardos claimed at that time that this new platform was built in the background, it’ll be launched in Spring and “called 2.0”.

Odds are that Nokia will also launch a bunch of new APIs for developers, like in-app billing and push notifications, in order to rival the likes of Apple. Expect updates to come during the event on Thursday, 9.30am UK time.