After amazing everyone by powering a drive-in cinema with their N8 handset, Nokia pulls another stunt, this time through its Research Lab in Tampere, responsible with the world’s first ice touchscreen. As shown in the video below, the surface is made out of blocks of ice that respond to the user’s touch through a nifty interface. 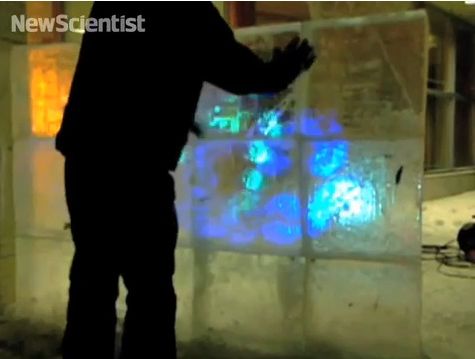 Jyri Huopaniemni (Nokia Research) claims that this experiment was performed to show everyone that an interactive computing interface can be built anywhere. A ton of 25 cm thick river ice was used for the task and it was trimmed down with the aid of a chainsaw, that cut it into 50 cm square slabs. Those were arranged so they could create a 2 metre by 1.5 metre ice wall.

Next, a heat gun was employed to blast the surface and an infrared light source was mounted behind the wall of ice, thus bathing it with invisible light. A couple of near-infrared cameras are also placed behind the wall and focused on the front surface, so once a hand is placed on ice, it’ll reflect the light towards the cameras.

The signal the cameras receive goes to a PC that establishes hand position, size and motion, creating the innovative interface. NRC Tampere is responsible with this task and they’re famous for exploring tech fields like sensing, context, social media, user experience, mixed reality and 3D solutions.