A new Nokia device has been spotted thanks to the OVI Publisher tools and it’s the Nokia T7-00 we’re talking about. While some may say that “T” stands for “tablet”, this is not the case, since the device is supposed to have a really low resolution. 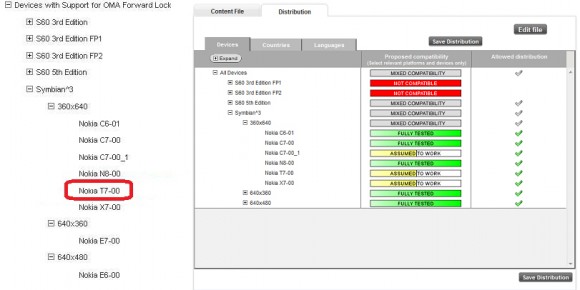 The T7-00 is also to be found in the Symbian^3 section of devices, a clear indication of what OS it runs. Its resolution is 360 x 640 and this is one of the many handsets listed with this type of screen, just like the N8 and C7, for example. Also on this list there’s the unconfirmed Nokia E6-00, sporting a 640 x 480 resolution screen.

This T series is certainly intriguing and we wonder what’s different from the other ranges of handsets… Camera? Music? Gaming?