According to a leaked Verizon document, the carrier is preparing to launch a couple of pretty hot handsets in the following weeks. First on the list is Samsung Rogue, that should hit the market this month, with a $370 price tag and subsidized. 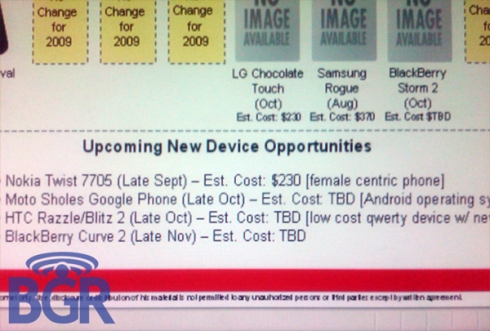 Next comes Nokia Twist 7705 aimed at the feminine public and ready for a late September debut, for $230. Samsung Intensity should also be arriving soon, at $130, while LG Chocolate Touch will make its debut in October, together with BlackBerry Storm 2 and HTC Razzle/ Blitz. The latter could as well be the XV6175 model we’ve been hearing about, a low cost QWERTY phone.

Motorola Sholes, the company’s first Android phone will also drop in October, sporting a red directional pad. Next comes BlackBerry Curve 2, ready for a November launch and… that’s about it. What do you say folks? Are these launch date plausible?