Although President Barack Obama is a BlackBerry fan, he had to quit his beloved smartphone, once he became USA’s number 1 man. Or did he? Recent reports have claimed that he was finally allowed to keep the handset, in order to communicate with his senior staff members and personal friends. 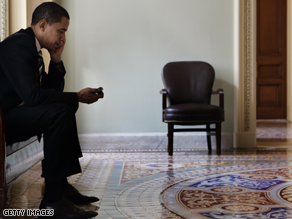 However, there are certain limitations to what is now being called the “BarackBerry”: it’ll have enhanced security and use limited functions. In case you don’t understand what the fuss is all about, know that Barack Obama is a texting freak, an email addict and an “obsessive” BlackBerry user.

The convention is that all US presidents must give up using e-mail once they take charge. Bill Clinton did it and George W. Bush too, but Obama’s about to change the rules once again. Also, you should know that all the content on his phone is public property and belongs to the state, so he can kiss privacy goodbye.

However, Obama’s BlackBerry is not an ordinary one, so most of the concerns regarding the President’s security have been dispelled. Some claim that the “BarackBerry” is in fact not a BlackBerry at all, but rather Sectera Edge, an exclusive phone made by General Dynamics and capable of advanced encryption and handling classified documents.