Home Oppo Oppo Could Have in Works a Bezel-free Phone; The Invention Patent Hits... 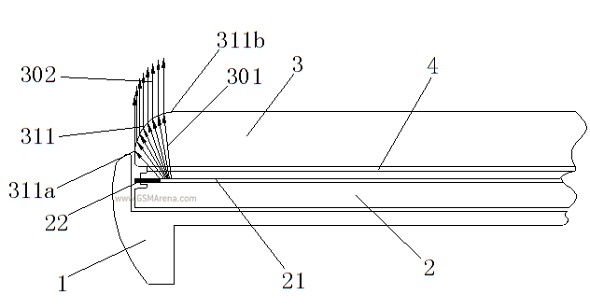 Past days here on GSMDome.com we’ve showed you a couple of live pictures with the latest phone on the market that packs an edge-to-edge display, more precisely a phone developed by the Chinese company LeTV. This one can be easily considered as an evolution of the Sharp Aquos Crystal, phone launched in 2014.

Today we discover another Chinese producer, more precisely Oppo, company that plans to launch a similar phone in the future, with no bezels around the display. They’ve prepared an invention that can be admired in the sketch above. We get to know that this technology makes reference to a second panel that will cover the regular standard panel in order to offer a bezel-free experience.

From what we can see, this concept includes a special curve at the end, a transparent one that diffracts light from the panel in such a way the display is extended as a projection. Using such a technology, the bezels of the phone will be hidden, offering the feeling of using a bezel-less phone. How good you consider Oppo’s idea?