Home Android Oppo Find 9 to be Available in Two Versions, Powered by Snapdragon... 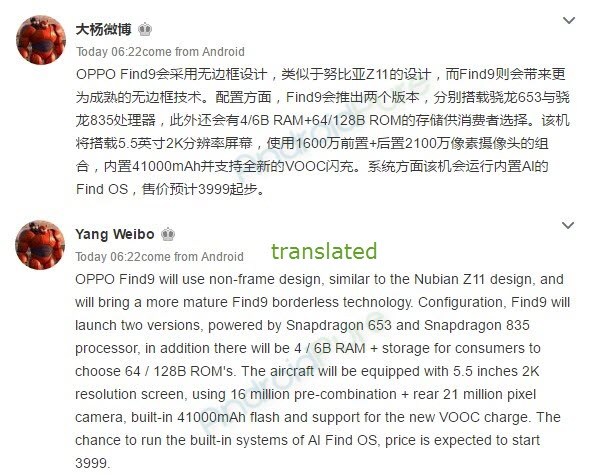 Oppo Find 9 has been in the rumor mill for about 2 years now, so it basically feels like a ghost. However, today of all days we found some extra info about it. Turns out that it’ll come in two versions, according to a post from China, one with a Snapdragon 835 CPU and the other with a Snapdragon 653.

Rumors also say that the device is going to be launched in March 2017. The device is said to adopt a “non frame design”, so basically a borderless approach much like the Xiaomi Mi MIX. It’ll have a 5.5 inch Quad HD screen panel in both versions and the RAM will come in 4 GB and 6 GB quantities. We’ll also see 64 or 128 GB of storage on board.

At the back there will be a 21 megapixel shooter, while upfront there’s a 16 MP camera. A 4100 mAh battery rounds up the specs list, complete with VOOC fast charging. The pricing starts at $581 for the lesser specced unit. Of course, we take all the info with a grain of salt and frankly I’m surprised we also haven’t seen a picture of the device surfacing.

Since Oppo sold a ton of phones this year, we have great expectations from them in 2017.