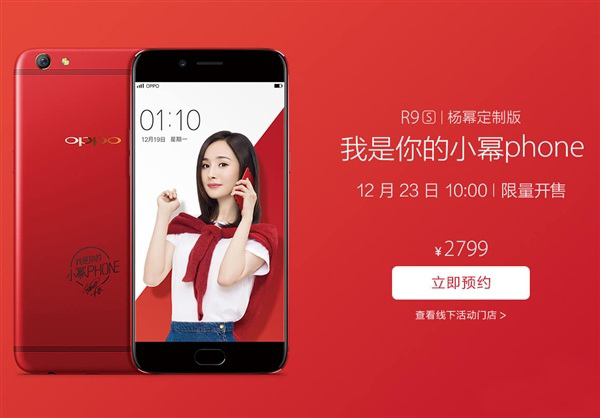 Since Christmas is coming at the end of the week it’s very likely we’ll see a bunch of special versions of smartphones and other devices, getting all glitzy and red. Oppo R9s is already part of this trend, going official in a red version.

Interestingly, this flavour of the device also comes with the autograph/signature of a popular Chinese actress/singer on the back. The specs stay the same, with the Snapdragon 625 CPU inside, plus a 5.5 inch screen upfront and 4 GB of RAM. There’s 64 GB of storage here, a 16 megapixel back camera and 16 MP front shooter, while the price is a very good $400.

The device is up for preorder in China and shipments start on December 24th. The original version of the device debuted on October 19th, with a powerful 16 megapixel main camera with F/1.7 aperture, which is the best on the market right now and only seen on the Galaxy S7. Previous color versions were black, gold and rose gold.