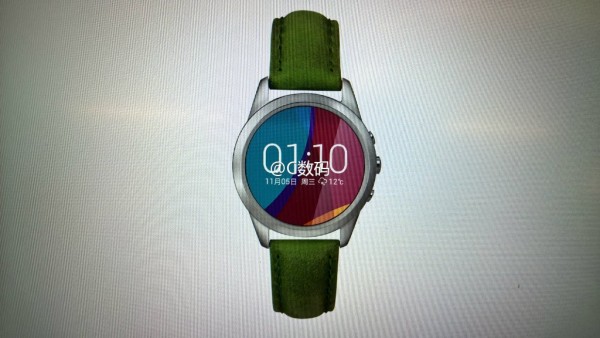 Oppo has a smartwatch coming, apparently, according to a fresh leak that also reminded us of an older one. Last summer, Oppo’s CEO apparently let word out that a certain Oppo Smart Watch was in the making. Now we’ve also got a picture:

The image appeared on social networks and apparently, the Oppo Smart Watch comes with Android Wear and a very nifty battery. It’s able to get one full day of functioning with just 5 minutes of charging, according to the info that appeared online. The design is pretty similar to the one of the Moto 360 and Huawei Watch, but the green belt feels like an interesting touch.

The body seems metallic, although we can’t guarantee that. Oppo already has a fitness bracelet out there, the O-band, but moving into the area of smartwatches is a totally different deal. We expect at least 512 MB of RAM inside, 4 GB of storage, a diagonal of more than 1 inch and probably the usual 320 x 320 pixel resolution (or a bit more).