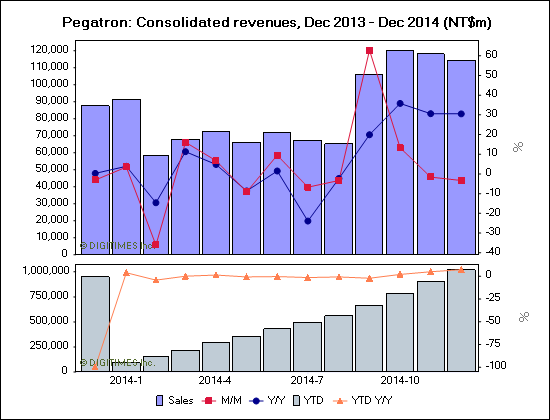 Pegatron, one of the major device manufacturers in China, also working with Apple has announced its revenues for December 2014. The company has reported consolidated revenues of $3.58 billion for that month, which means a 3.25% drop on month and a 30.48% increase on year.

For the year 2014, the company reached a total of NT$1.02 trillion, up 7.23% from 2013, a year that brought them a serious decrease in revenues. Pegatron is a Taiwanese electronics manufacturing company, that handles the development of computing, communications and consumer electronics, for branded vendors. It makes a lot of gear, from consoles to desktops and from motherboards to video cards and smartphones.

The company came under fire last month, when a BBC investigation showed poor conditions and employee mistreatment at the Pegatron factories that make Apple products near Shanghai. In spite of that PR blunder, profits are still booming and employees are still working 18 days straight without a day off…