The Puma Phone was unveiled during this year’s MWC and you have to know that this sporty device is made by Sagem and has now reached the offers of European carriers. One of them is PosteMobile, from Italy, relying on Vodafone’s network and selling the Puma Phone for $360. 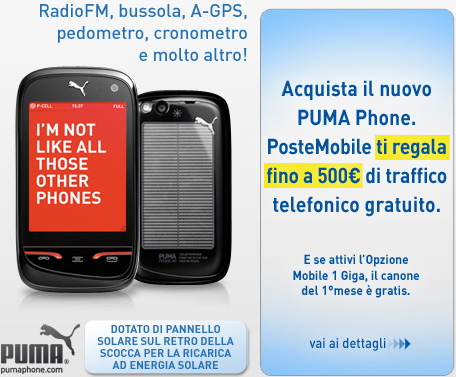 This phone comes with an interesting offer on PosteMobile, allowing customers to win up to EUR 500 in “telephone traffic”. This unit made by Sagem is a small touchscreen device with a 2.8 inch QVGA display, a GPS, pedometer, HSDPA, sports apps, a 3.2 megapixel camera and a solar panel at the back.

Apparently, there will also be Puma Phone 2, that will run Android and it’ll hit the market in 2011.

MWC 2010: Sagem Cosyphone, a Handset for the Elderly, Complete with NFC Technology