Smartphones are becoming more and more mainstream these days, specially thanks to HTC, that’s launching a budget smartphone and the reasonable prices of high end devices. Also, as the devices progress, apps become more popular, so their usage increased, as shown by a recent Nielsen report: “The State of Mobile Apps”.

Said report shows the major smartphone platforms and their performance in the mobile space. The iPhone leads the pack, as far as the quantity of apps installed is concerned. Statistics are pretty clear on the popularity of smartphones nowadays: while in 2008 14% of American wireless subscribers had a smartphone, the percentage increased to 19% in Q3 2009 and 21% in Q4.

We have to mention that Nielsen surveyed 4,200 people, who had downloaded at least one app over the last month. Apparently, the most popular applications are the games and gaming apps, followed by news/weather software and maps/navigation/search ones. Facebook and Google Maps are the names that came up most of the times, across all smartphone platforms. 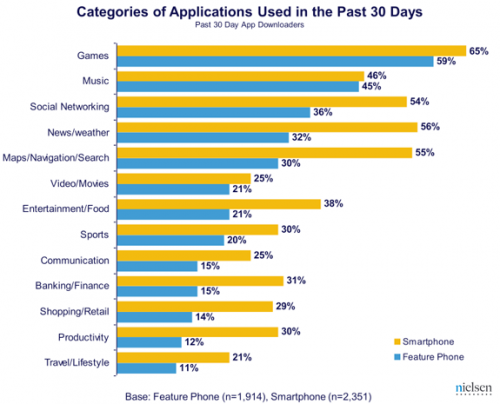 As claimed before, the iPhone users have the most installed apps, with an average of 37 per device, while Android users have 22, followed by Palm with 14, Windows Mobile with 13 and BlackBerry with 10 per handset.