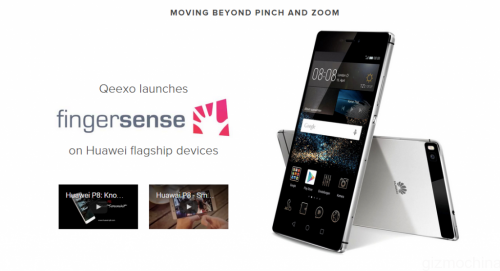 A thing that not many of us saw when Huawei P8 was launched, is the one that the phone arrives with a special technology in the pack. We’re talking about Knuckle Sense, a feature that allows the users to interact in a different way with the touchscreen panels, more precisely by using their knuckle.

Thereby, by simply knocking on the display we can take a screenshot and later sent the file through email or by using messenger. The technology behind this feature is developed by Qeexo company, an US startup that was founded three years ago, in 2012.

Beside the gesture exemplified above, the FingerSense technology developed by Qeexo can do more. Probably the most interesting things about it, is the capability of the devices to recognize even those gestures made with our nails, this feature arriving on time for the female audience. We also get to know that this technology is based on the ability to differentiate those vibration caused by a certain part of our hand.

As you can see in the video above, through that knuckle gesture we can easily copy and paste text, open the settings menu from our browser, or cut a certain part from the picture showed on the screen in order to share it or save in the gallery. According to the guys from Qeexo, is expected that this technology to become available in the future for more and more devices.

How useful do you find the FingerSense technology at the moment?