If you’re willing to jump to a new Android phone, you may want to buy it from Radio Shack, since they’re now basically offering you $50 to buy one of their Android phones. They offer goes like this: you make an Android purchase of $100 or more and you get $50 off. They also mention that you need an upgrade or new 2 year plan and qualifying data pack, that was expecting frankly speaking. 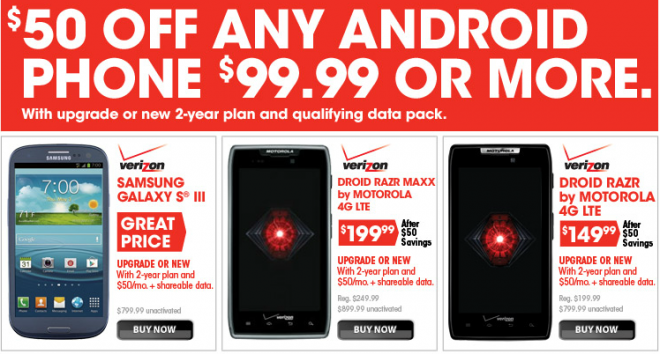 Among the models included in the promotion we find the Samsung Galaxy S III, Motorola Droid RAZR MAXX and Motorola Droid RAZR. There are handsets from AT&T, Sprint and Verizon on the list, so you can pick your favourite carrier. The deal goes on till July 28th, so you have about a week to pick your poison. If you make the purchase online, you’ll have until the end of August to decide. The good thing here is that if you’re the client of a carrier and you want to renew your contract, you’re basically getting a new phone for almost nothing.

Expect similar end of summer offers from other retailers and store chains, since the new generations of devices are coming up and the old ones need to be sold before they’re left on stock. Some examples here: Samsung Galaxy Note, the Droid RAZR, Galaxy Nexus and the iPhone 4S.