Things are getting serious for RIM, the Canadian maker of Blackberry models, who recently announced low earnings, worse than the analysts’s estimations. Now there’s a chart out there showing the company’s huge decrease in market share, in the United States. What once was 50% now gets closer to 10%… 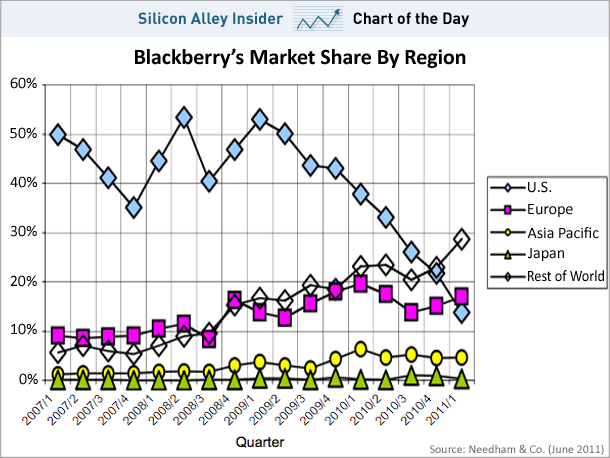 Considered by many the company that invented the smartphone market, RIM has been taking hits from the countrymen at Apple and its powerful iPhone, plus the Android models gaining popularity. Meanwhile, as the iPad took over the tablet market, RIM only replied with the feeble PlayBook, that lacks a couple of vital features and had its 4G version delayed.

Also, we’re still to hear about a modern BlackBerry OS follow-up launch date… The profit for the Canadian company in Q1 2011 fell 9.6%,reaching $695 million and the revenue was $4.9 billion. On Thursday when this info was announced, the shares of the company fell 14%, as the profits didn’t meet the analyst’s estimates.

Will the maker of the BlackBerry phone have the strength to pick itself up and restore the former glory?