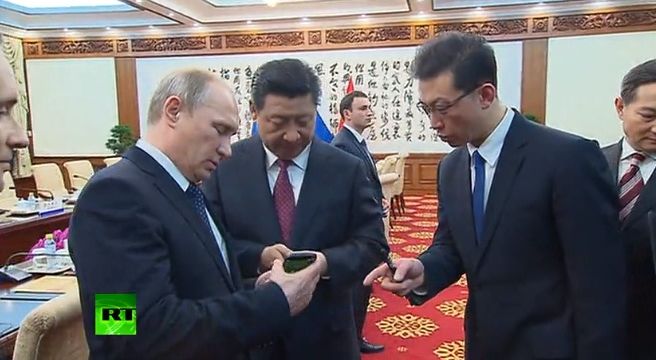 During a visit made by Chinese president Xi Jinping in Russia, he received an interesting gift from Russian head of state, Vladimir Putin. The official received a phone made in Russia, the famous YotaPhone 2, that comes with a dual screen.

Vladimir Putin gave this present to his counterpart, as shown in the image above and it all happened after an official meeting at the Asia-Pacific Economic Cooperation summit in Beijing. This was actually an anniversary meeting between the two presidents, being the tenth encounter of Putin and Xi Jinping. The YotaPhone 2 also brings a data protection system, developed by Russian engineers, thus making the phone “unique” as far as safety is concerned.

Xi Jinping inquired if the handset would involve a Chinese partnership at some point and Putin was open to it. The press agencies claim that the Chinese leader is the world’s first owner of the new YotaPhone 2, with its official launch being actually scheduled for December. The dual screen phone was unveiled to the public earlier this year at MWC 2014 in Barcelona and now it’s ready for commercial release.

It has a dual screen, with one of the displays being based on electronic paper technology. Its price tag is $300.