Here we are again, with some figures that might interest you, courtesy of ComScore. They provide a great insight into the mobile market in the states, as shown by the figures in the table below. Thus, we learn that Samsung is rocking hard, with 25.5% of the total mobile subscribers in the US, applied to the July 2011 time frame. 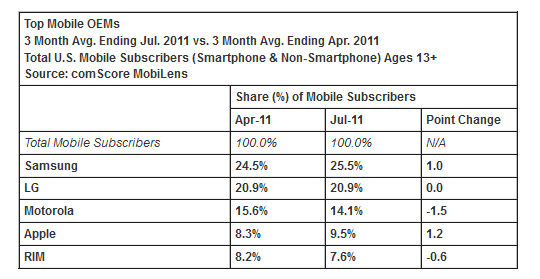 The number was 24.5% in April, so Samsung has been experiencing growth. Coming in second is LG, which is no surprise, since they’ve been pulling off some nifty Optimus devices lately, so they earned the 20.9% market share that they’ve kept since April. Third is the freshly Google bought Motorola, with 14.1%, a decrease from April’s 15.6%.

As far as the smartphone platform market share goes, this one involved the 82.2 million people in the US with smartphones and 34 months of study ending in July 2011. Android dominates the charts, with 41.8%, a huge 5.4% increase from the past study, in April. On second spot there’s Apple, with 27%, a 1% increase from April, showing that the Cupertino giant is hanging tight.

RIM gets third place with 21.7%, a huge disappointment here, since they dropped 4%. More data from the study can be found in the source link below, if you’re curios. 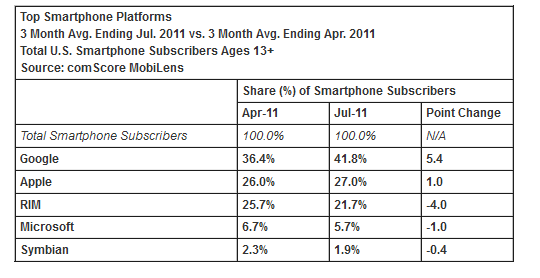