Motorola’s got a new + model out there, after the Defy+ that was announced weeks ago and will debut any minute now. I’m talking about the Motorola Pro+, a QWERTY droid unit, that comes with a portrait keyboard that looks pretty comfortable to use, as shown in the video below. 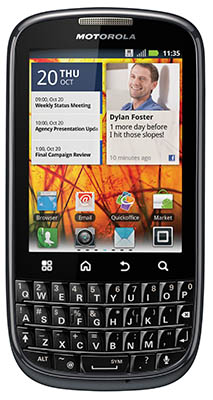 This is a 1GHz single core handset with a 3.1 inch VGA touchscreen display and hardware keys. 512MB of RAM and 4GB of storage handle the memory department, while the rest of the specs include a microSD card slot, a 5MP camera with autofocus and WiFi. GPS and quad band GSM/GPRS/EDGE as well as dual band 3G/HSDPA are supported and inside the phone you will find a 1600 mAh battery, with all the juice needed for everything to go smooth.

Motorola Pro+ runs Android 2.3 Gingerbread and while we take a peek at the promo vid below, we’re closer and closer to the debut of Defy+ handset, at least in the UK. September, they said… but we’ll see!