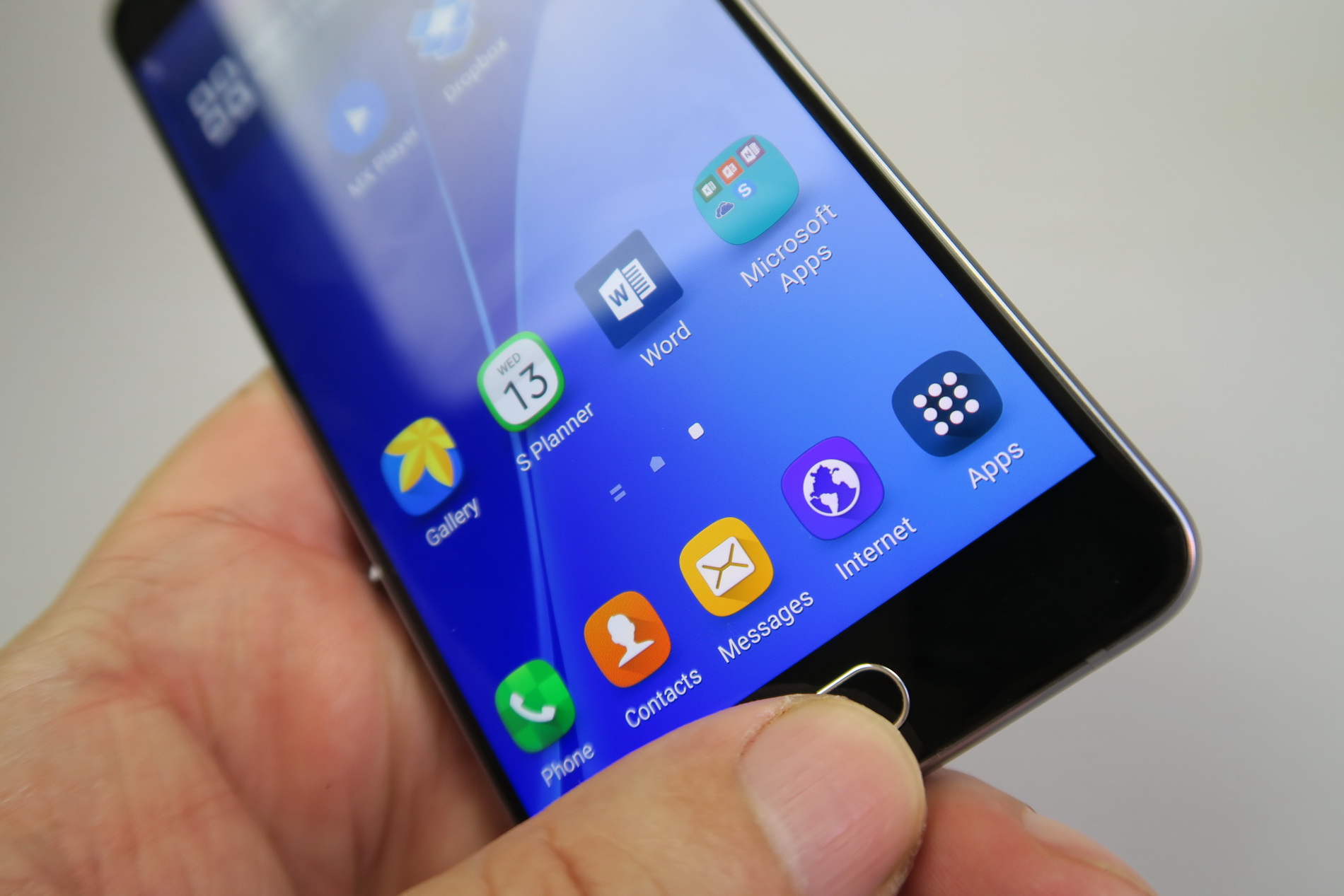 Samsung Galaxy A5 (2016) is part of the trio that we tested this year, including the Galaxy A3 (2016) and Galaxy A7 (2016). They offered a mixed experience, some of them being excellent and others a bit underwhelming, but overall the series is solid. The Galaxy A5 (2016) is a midrange phone, launched in December 2015 and priced at around $349. 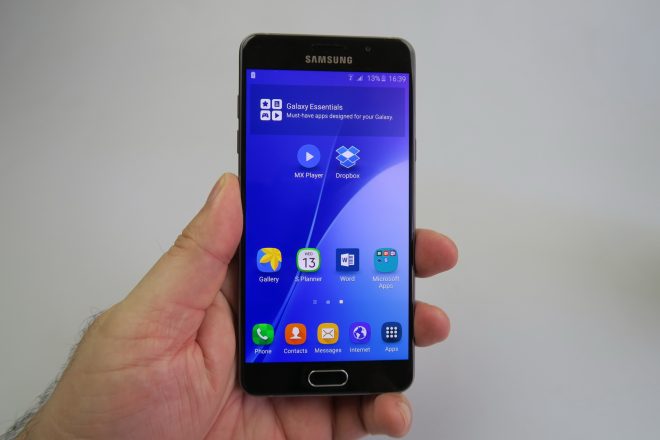 We’ve already tested the Galaxy A5 first gen and loved it, so let’s see what this model is all about. Fitting inbetween the Galaxy A3 (2016) and Galaxy A7 (2016), the device uses a metal and glass case, unlike the predecessor, that opted for a a full metal unibody design. The new A5 is clearly inspired by the Galaxy S6, as its dual glass panels show.

Available in black, white, gold and pink, the device measures 7.3 mm in thickness, a bump up from the 6.7 mm of the predecessor. It also weighs 155 grams, 32 grams heavier than the first A5. At the front and back of the smartphone we find a 2.5D Gorilla Glass 4 panel and a metal frame sandwiched between. The grip is good and the device isn’t slippery. 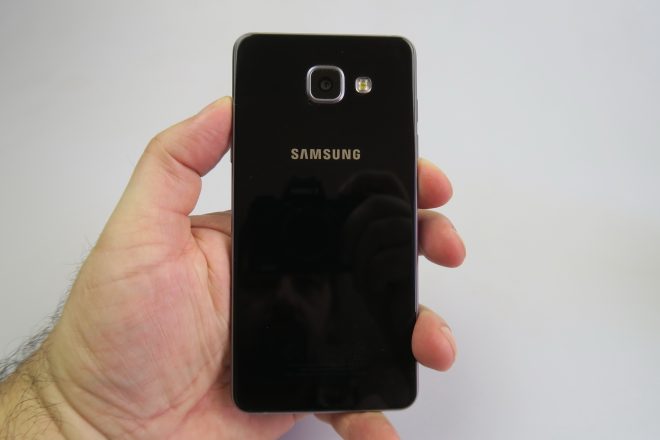 Buttons are comfy and one hand usage is quite easy. It’s a premium phone, with a solid build and a good looking, actually being one of the best looking sub $400 phones. I should also mention, it’s a bit of a fingerprint magnet. The hardware includes a 5.2 inch screen with a Super AMOLED panel and Full HD resolution, an upgrade from the Galaxy A5’s HD screen.

It has narrow bezels and as far as the video player goes, it offers a Pop Up Play feature, Play Speed, subtitles and lets you pinch to zoom. The viewing experience featured very vivid colors, bright and clear image and wide view angles. The contrast is good and the black is deep. Pixels are of the Pentile Matrix kind, with a diamond shape setup. 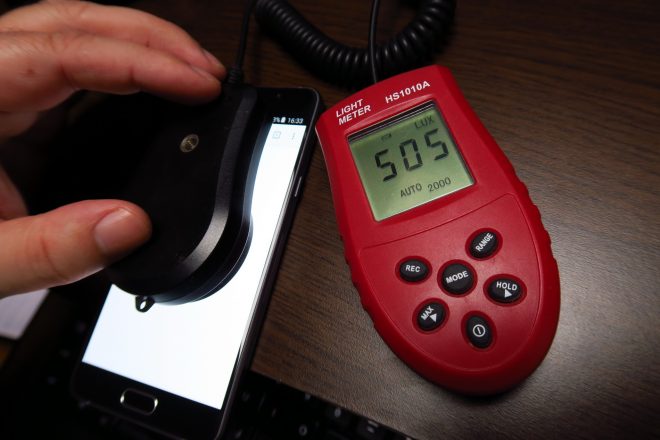 We used a luxmeter to measure the screen’s brightness and got as high as 505 LUX, which is great. That was measured indoors and it’s an increase from the 370 LUX of the predecessor, also measured indoor. I should also mention the current brightness makes the Galaxy A5 (2016) the equal of the Nexus 6P and HTC One a9, plus it beats the Galaxy A7 (2016) by 1 LUX.

Screen settings include brightness, font options, Smart Stay and Screen Mode, the latter with sub options like AMOLED Cinema, AMOLED Photo and Basic. It’s a great screen overall and even flagship-worthy. Continuing the hardware specs list there’s an Exynos Octa 7580 CPU in the mix or the Snapdragon 615 in another version of the phone. 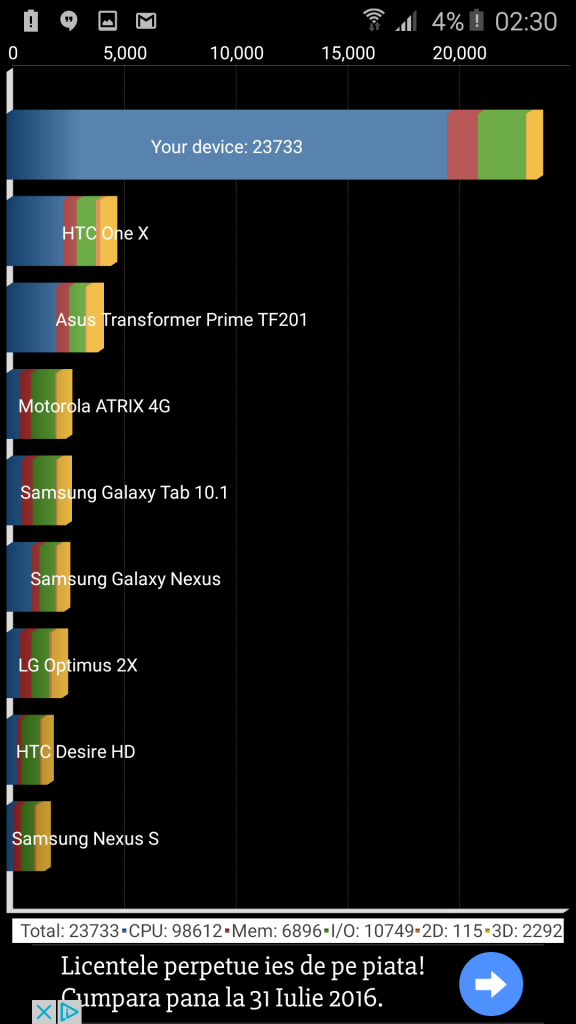 We have the Exynos model, that also brings the Mali T720 MP2 GPU, 2 GB of RAM and 16 GB of storage, of which 10.8 GB are available to the user. The microSD card slot provides an extra of up to 128 GB. There’s no lag in the homescreens, but the apps take a bit too long to fire up. I’d say this model is OK for gaming and both the snowboard title we tried out and Riptide GP2 worked out fine.

In benchmarks we got past HTC One A9, Huawei Honor 5X and ASUS ZenFone 2 Laser, plus we were close to the Galaxy A7 (2016), so we’re not doing bad at all. The temperature achieved by this model is a solid 37.5 degrees Celsius after playing Riptide GP2 for 15 minutes, so there’s no overheating. Time to discuss acoustics! 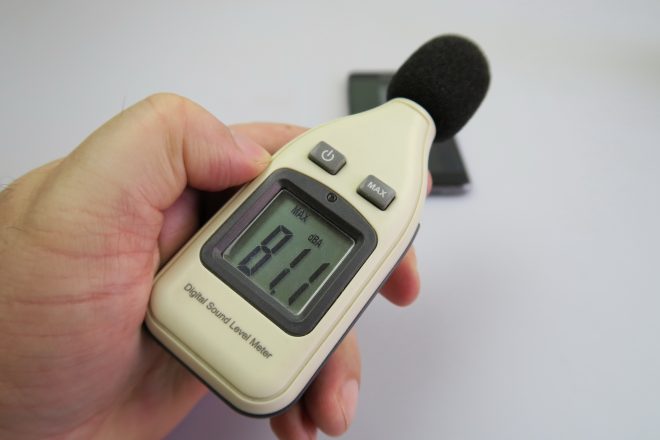 There’s a single speaker at the bottom and a pretty typical music player, with a SoundAlive option, that features an equalizer based on genres. There are knobs here for extra bass and treble, plus instrument and vocal tweaks. Channels of various frequencies can also be tweaked and then there are options like 3D, Bass, Clarity and Concert, plus Adapt Sound, SoundAlive+ and Tube Amp, as well as Smart Volume.

The found the acoustic experience to be quite OK, volume-wise and the sound was clear, plus crisp and there was no distortion. I also felt that there’s too much bass, feeling like it drowned the other sounds. The headphones bundled with the device are comfy, plasticky and have a big remote, plus good noise isolation. 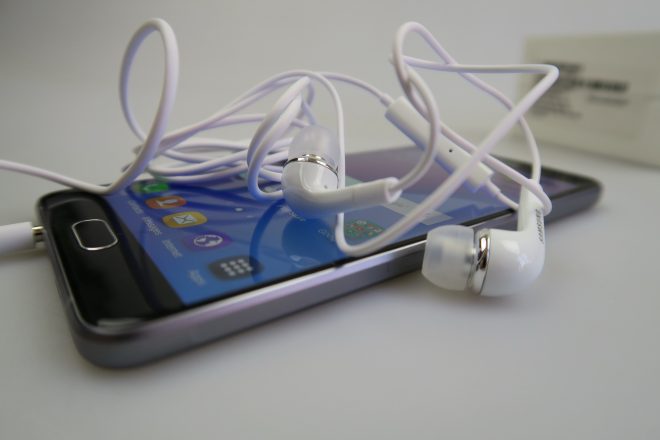 These headphones are very loud, offer a good bass and a great sound quality. We’ve got FM radio in the mix as well and now let’s see how the speaker did in the decibelmeter test. We scored 81.1 dBA, which is just OK and surpasses the predecessor’s 77 dBA, that’s for sure. It also beats the HTC One A9 and Xperia Z5 Premium. so that’s good.

Time to talk about the camera! Samsung Galaxy A5 (2016) has a 13 megapixel back shooter, with F/1.9 aperture and LED flash, as well as a 4:3 sensor with OIS and 28 mm field of view. The front cam is a 5 MP unit with F/1.9 aperture and the ability to capture Full HD video. You can trigger the camera app very fast, by double tapping the Home button and it’ll activate quickly, I have to admit. 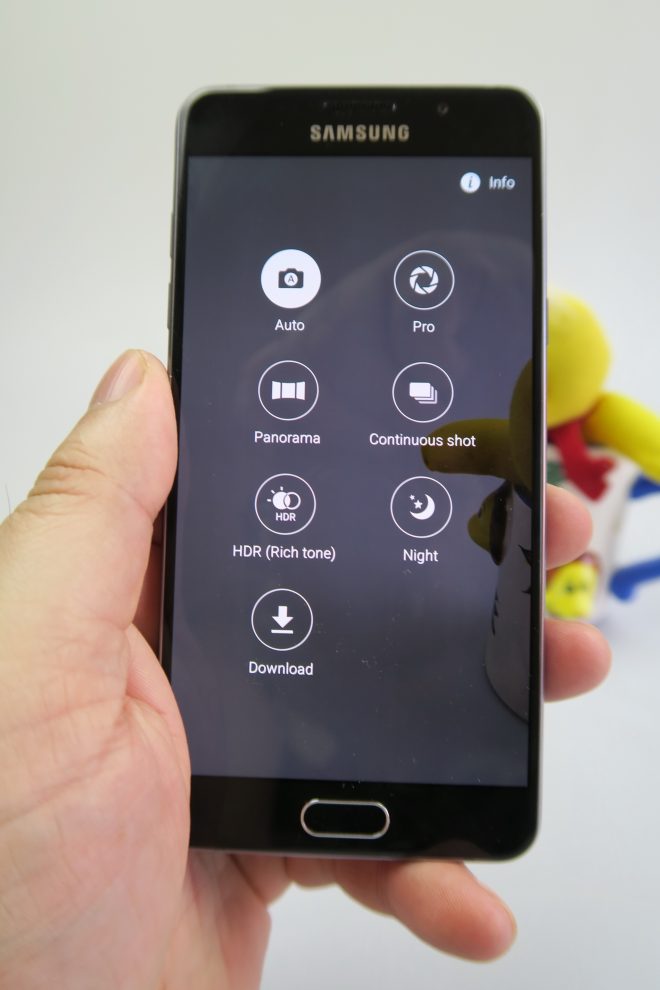 However, the focus was rather slow, but picture taking had an OK speed. Zoom was rather fluid. The UI of the camera is basic, offering options like effects, timer, flash, resolution (13 MP in 4:3, 9.6 MP in 16:9). We can shoot video in Full HD tops and there’s also voice control available here. Camera Modes include Auto, Pro, Panorama, Continuous Shot, HDR, Night and of course you can download more.

The Pro mode offers metering, white balance, ISO and exposure options. We took the day time gallery shots on a sunny April day, with 30 degrees of sun to enjoy. The details were great, in both closeup and landscape and we registered very realistic colors. The panorama was modest, at 7376 x 640 pixels in resolution and I felt that the HDR of the church was very well done. 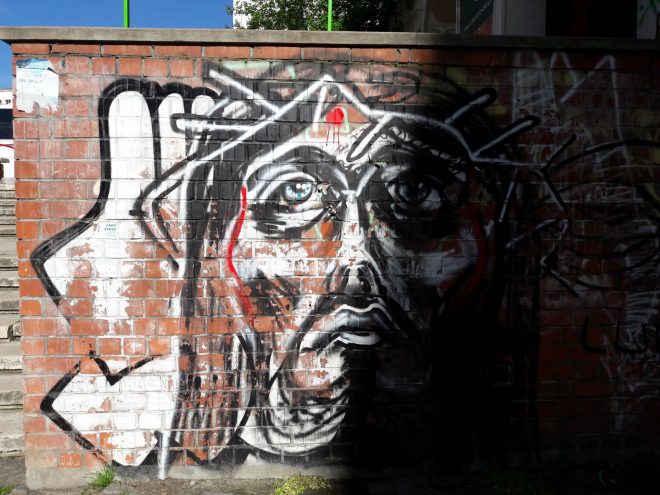 Our shots had great texture and I’d go out and say that the quality level is on par with the Nexus 6P and LG Nexus 5X. There’s no blurred shot here and the camera faces the sun pretty OK. We liked the texture of the statues we captured and we scored some good selfies. Everything was clear and bright, but some of the background was a bit burnt.

Zooming into the shots of a statue we found that the details didn’t deteriorate too much, so that’s a nice feat to enjoy. Flower closeups were also excellent. Samsung Galaxy A5 (2016) manages to beat all the ASUS ZenFone models we tested last year and all the Huawei Honor models so far. It’s pretty much on par with the excellent dual camera packing Huawei Honor 6 Plus. 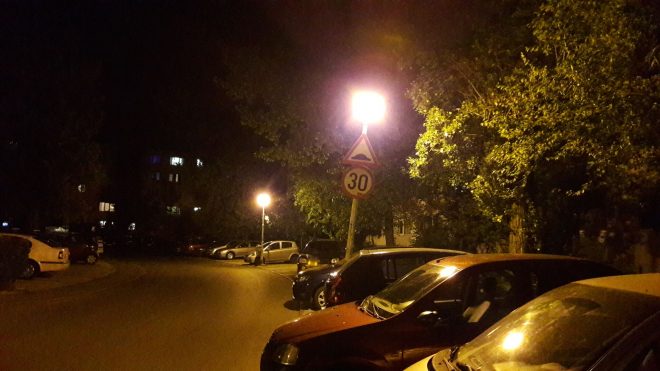 Low light photos were pretty bright, but they had some fuzz in the mix. The flash was great and so were the colours. Night mode was shockingly good and light halos were at an OK level. I feel that this camera is somewhere between the Galaxy S5 and S6 in the photo area. Video capture happens in MP4 format, with a Full HD resolution and 30 FPS, plus a 17 Mbps bitrate.

I remember perfectly the video performance of the Galaxy A5, since it filmed perfectly for its price range. The newer A5 follows it up with great clarity and colors, a pretty solid microphone and good quality. The captures also feel a bit shaky, in spite of having optical image stabilization here. The sky was rather burnt, but at least when we strutted around on the street, the stabilization handled it well.

I noticed that each filming starts with a refocus sequence, which is rather unpleasant. Low light video capture registered good brightness, OK colors, some clarity loss in motion and overall it was reasonable. Overall, the newer A5 keeps the audio capture of the old one, but offers better colors. The leap isn’t huge, considering the quality of the last year model.

I’d place filming on par with the ASUS ZenFone 2 Laser and somehow above the Galaxy A7 (2016), that let us down a bit. We’re done with the camera, so let’s talk about the web browser. That one is fast, but gets poor benchmark results in Sunspider and Browsermark, as well as Vellamo. The virtual keyboard offered here is comfy and it also includes a numeric row. 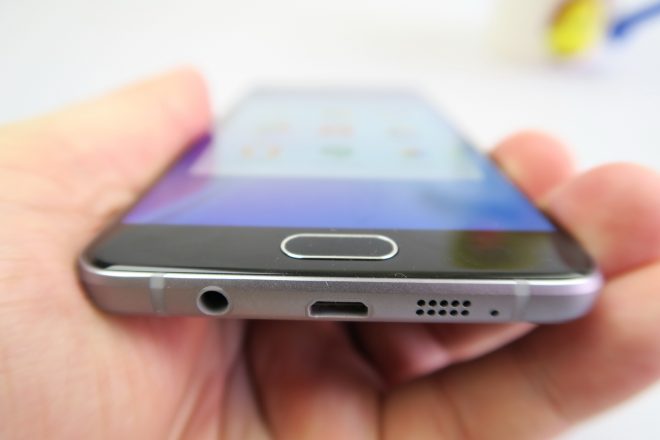 On the connectivity front, we’ve got a nano SIM card slot, 4G LTE Category 4, with up to 150 Mbps download speed, microUSB 2.0, ANT+, WiFi a/b/g/n, NFC, Bluetooth 4.1, WiFi Direct, GPS and Glonass. The calls are loud and clear, the signal is good and so is the microphone. The Speedtest revealed a value of 26 Mbps in download and 27 Mbps in upload, being quite good.

Time to discuss the battery: it’s a 2900 mAh unit, a clear increase in capacity from the 2300 mAh one of the Galaxy A5 2015 and in our HD video playback test it offered us 12 hours and 19 minutes, an excellent value. It surpassed the A5’s 9 hours and even beat some heavy hitters, like the Xiaomi Mi 5 and iPhone 6s. in PCMark we scored a great 9 hours and 24 minutes, which is huge and goes past the Galaxy S7 Edge for example. 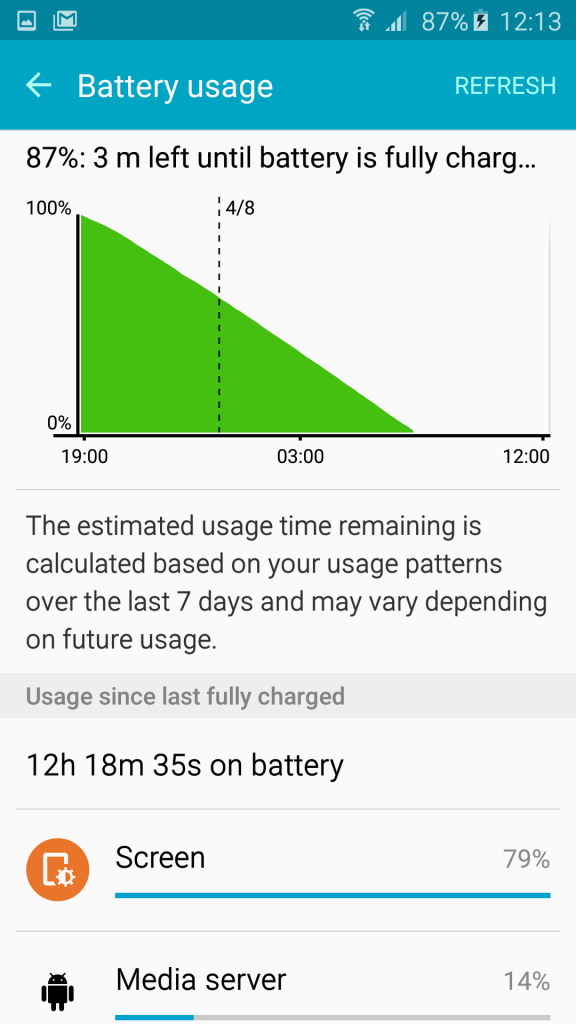 The A5 is also beaten with its 6 hours and 51 minutes. Only the battery phones seem to surpass this model. Charging requires one hour and 55 minutes, which is quite OK, but 10 minutes more than the predecessor. Settings include Power Saving options, such as limiting CPU usage and frame rate, turning off capacitive keys and more.

There’s also the Ultra Power Save option, with a grayscale UI and only the basic apps. A great battery and a very solid phone in that area. Samsung Galaxy A5 (2016) runs Android 5.1.1 Lollipop with TouchWiz on top and and it offers the usual leftmost homescreen dedicated to Flipboard. The UI is colorful, has flat icons and multitasking is handled via a carousel, plus a split screen view of apps, that can run on the screen two at a time if need be. 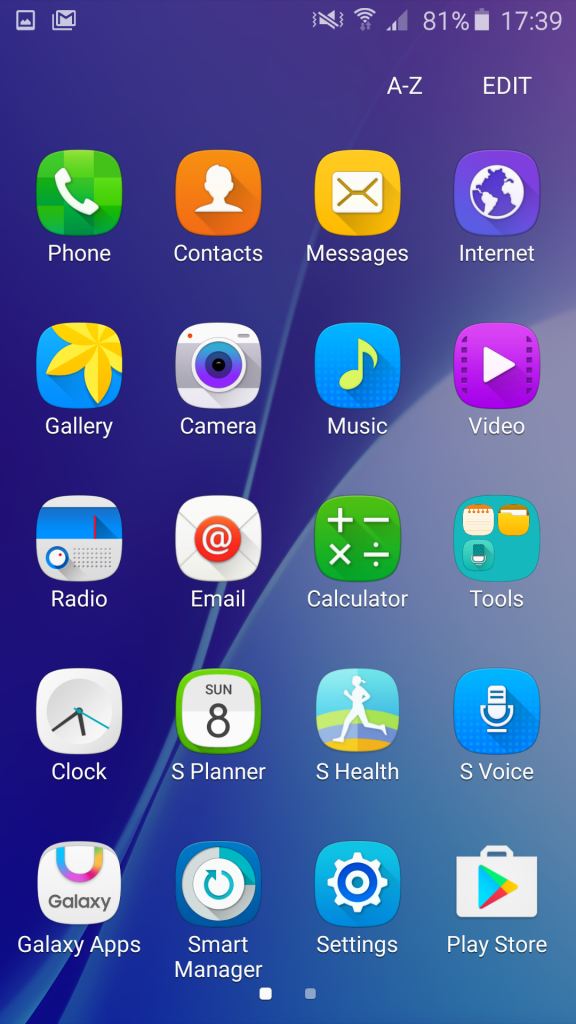 Keeping the homescreen pressed reveals the likes of wallpapers, widgets, themes and screen grid to tweak. The dropdown bit includes Quick Settings, a brightness slider and notifications, while the actual settings feature a Quick Settings area, motions and gestures, themes and an Easy Mode. The fingerprint scanner has a lengthy setup, but it’s accurate and unlocks the device pretty fast. 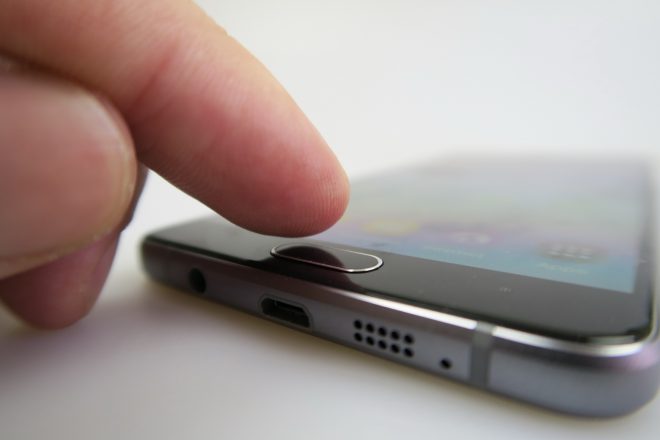 In the end it would be just to call this the Samsung Galaxy S6 Mini, since there are so many quality aspects about it that would qualify for that naming pattern. It’s one of the best midrangers on the market, with no big flaw. It has a great camera and battery, also the display is great and the design looks awesome. What’s there not to like? I’d take it over the HTC One A9 any day. The updated price is here.