I remember a time when the Galaxy A models were bombshells: everybody wanted one, because they were sexy and powerful. The Galaxy J series wasn’t half bad either… They both have morphed into the brand new expanded Galaxy A 2019 series, which had the Samsung Galaxy A50 as a star for a while. We have it here, for unboxing purposes and that’s exactly what we did, after the break. The device is priced at around $300.

We’re dealing with a glossy and plasticky blue smartphone, launched in March 2019 and sporting a triple back camera, plus a fingerprint scanner within the display. Inside the box we find the manual and warranty stuck to the lid, just like the Galaxy S10 series. There’s also a metal key used to access the slots, an USB Type-C cable, manual and headphones. 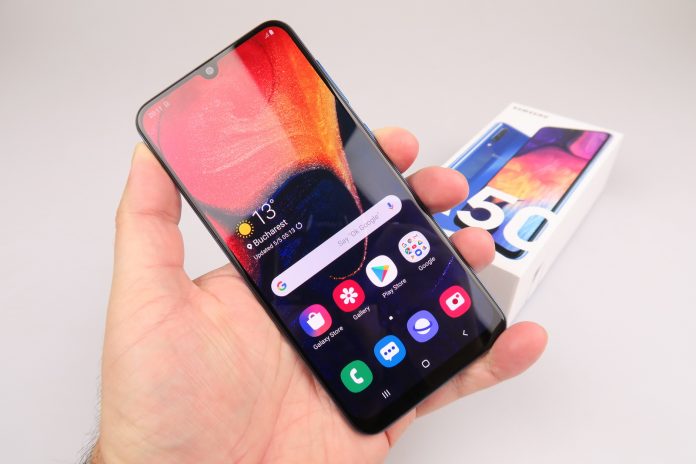 Samsung Galaxy A50 has an Infinity-U Display and it’s the first Samsung phone with a notch, actually a tiny one, a teardrop one. Still, considering that Samsung promised to never touch that, it’s a bit odd to find them with this approach. The device is available in black, white or blue and we have the shiny blue version. The South Korean company is calling this type of body “3D Glasstic” a sort of combo between glass and plastic, at least as a wordplay. In real life, it’s actually an unibody polycarbonate case, that feels much cheaper than the past Galaxy A models. 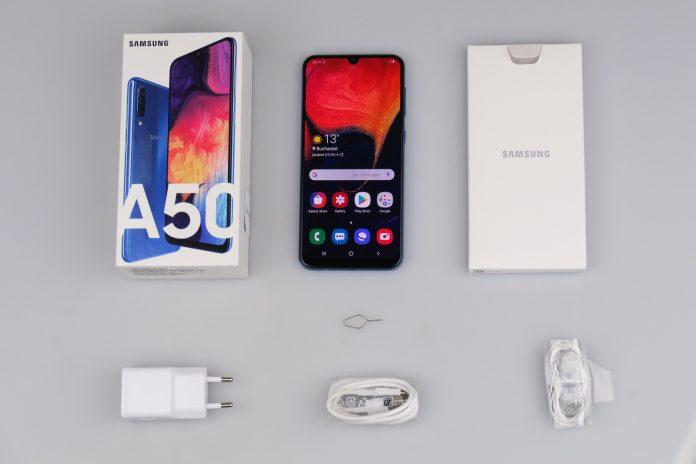 Samsung Galaxy A50 measures 7.7 mm in thickness and weighs 166 grams. To be honest it feels really light and pretty comfy, with a decent grip. It’s far from premium looking though. On the display front, we’re being treated to a 6.4 inch Super AMOLED screen, with a 19.5:9 aspect and a resolution of 2340 x 1080 pixels. There’s also Gorilla Glass 3 protection and moving inside, the Galaxy A50 integrates an Exynos 9610 octa core CPU, 4 GB or 6 GB of RAM, plus 64 GB or 128 GB of storage, as well as a microSD card slot. 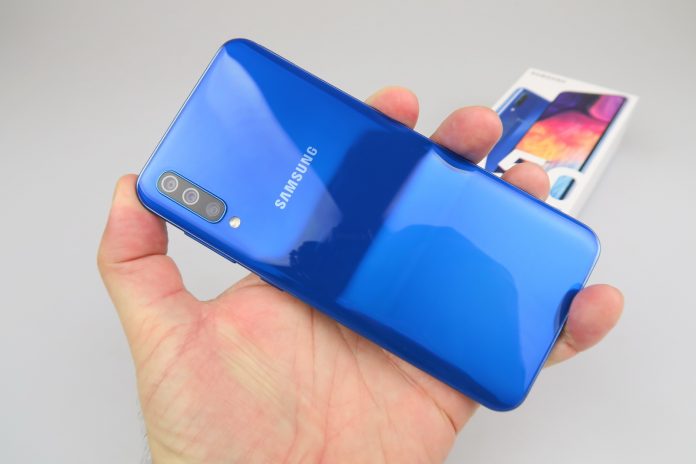 On the battery front there’s a 4000 mAh unit, with 15W quick charge. To keep things interesting, Samsung also threw in an in display fingerprint scanner, which from what I’ve heard is not fast at all, but it has been updated via software already. Now off to the cameras! We get a 25 megapixel fixed focus camera upfront for selfies, while the back side features this trio:

The device runs on Android 9.0 Pie with One UI and it’s available in single SIM and dual SIM versions. It’s got an USB Type-C port at the bottom, WiFi dual band and the usual Bluetooth and NFC. On paper we are promised up to 19 hours of video playback. We took a quick glance at the camera UI and also took some pics and I can already tell you that the ultra wide camera is quality and the main one is not half bad. Mixed feelings about the selfie shooter…

We’ll be back with a full review and you can get the phone here in the meantime.