Nokia 9 Pureview has been the topic of rumors and speculations for 2-3 years and it was supposed to debut with the Nokia 8. It got delayed and reimagined with Light technology on board. You know Light, the company that made the 16 camera phone. Back to the Nokia 9 Pureview, it was unveiled at MWC 2019, with a crazy 5 camera setup at the back and a price lower than the rivals, at $699. We unboxed it below.

Nokia’s Pureview started with the Nokia 808 Pureview Symbian phone, with a crazy level of details. It was followed by the Lumia 1020 with a similar camera setup and excellent capture. Even today both phones are respectable in some optical areas. Nokia 9 Pureview completes the trilogy with even more goodness, hooking up Light and Zeiss. 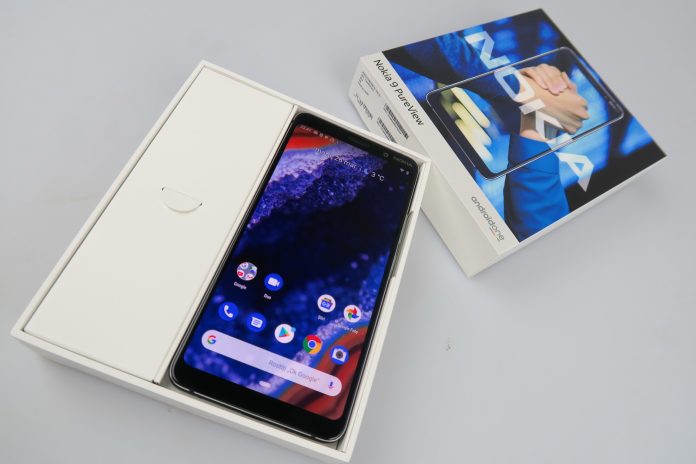 In spite of its optical achievement, the device is rather compact and has no protrusion for the camera module. The back is covered with glass, with a very glossy approach, but not a bothersome one. Grip also doesn’t seem affected. It’s a pretty compact phone for its features. Inside its box we find a charger (rather large), USB Type-C cable and a pair of headphones similar to the Nokia 8 ones. There’s also a SIM key in the mix and a manual bundled.

The odd aspect is that the headphones come with a 3.5 mm audio connector, but the phone itself doesn’t have such a connector, opting for USB Type-C. Luckily there’s an adapter to hook them up. Made of glass and metal, the device has a rather large chin and also large bezels for 2019. Some may not dig this approach, pretty similar to the Nokia 8. 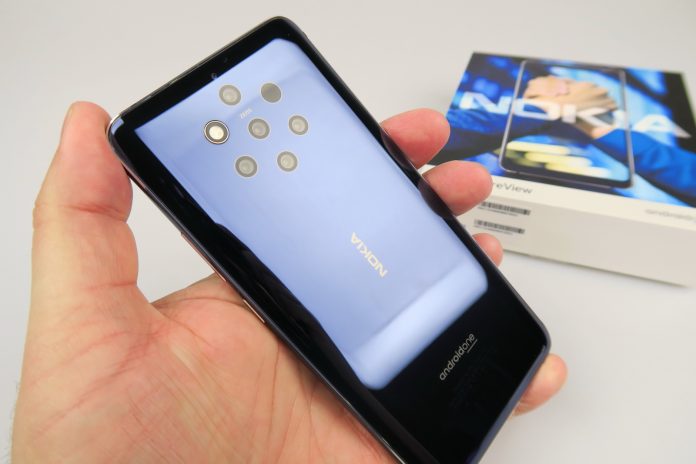 Nokia 9 Pureview is 8 mm thick and weighs 172 grams. It’s only IP67 certified, so not a full waterproofing and dust proofing. It provides wireless charging and packs a 5.99 inch P-OLED screen with a 2880 x 1440 pixel resolution and HDR10 support. Inside we find a compromise solution, the Snapdragon 845 CPU from last year flagships, plus 6 GB of RAM and 128 GB of storage. No trace of microSD card slot, even though we’re supposed to be playing with RAW/DNG files.

Specs also include a 3320 mAh battery and on the connectivity front there’s an USB Type-C port, Bluetooth 5.0, WiFi a/b/g/n/ac and 4G LTE. The hue shown here is called Midnight Blue and it’s a looker. The fingerprint scanner is embedded in the screen and there’s also face unlock. We saved the camera for last, so let’s address it! 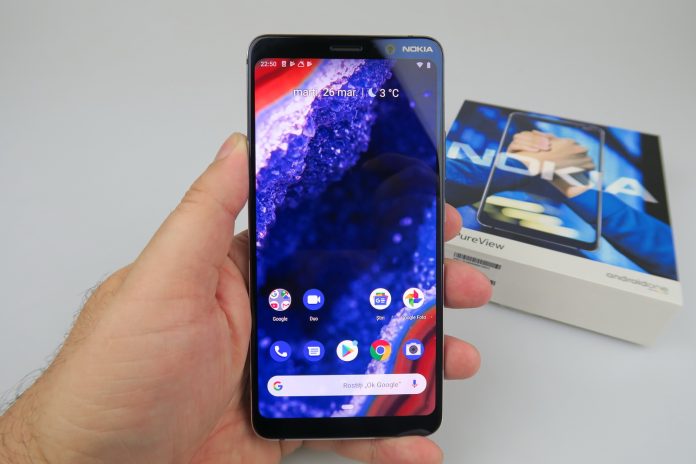 We have a selfie 20 MP camera with F/1.8 aperture and Pixel Binning, that combines a few pixels into one and pulls off brighter 5 MP shots. The back camera is the selling point though, with 5 sensors available. 2 of them are RGB sensors and 3 are monochrome ones. There’s also a sixth Time of Flight sensor, for depth capture, plus a dual tone LED flash.

No trace of tele or ultra wide lenses here. Nokia 9’s secret is combining 5 photos taken at the same time into one shot. The handset is able to capture 1200 layers of depth, where a normal phone captures only 10. The camera also provides 12 stops of dynamic range. The Bokeh is done from software with Google’s aid, while Adobe contributes will multiple editing options via Lightroom, tailored for this device. 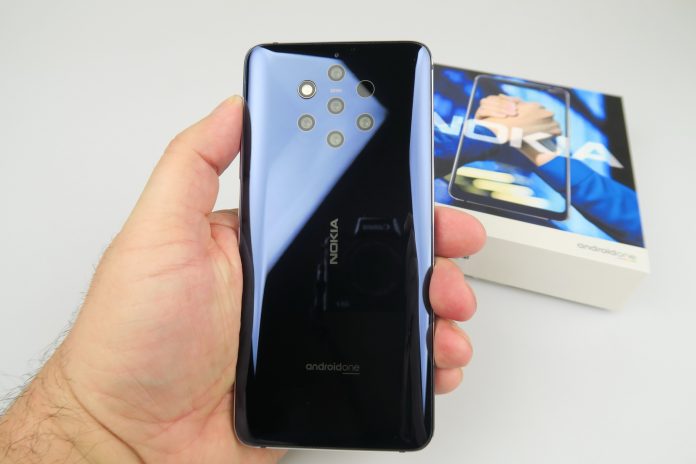 The phone uses a new Pro Camera version and it’ll be available in a limited batch of units worldwide. Software-wise it runs on Android Pie, with Android One certification and a clean UI. The only tweaks have to do with the camera UI, that’s minimalistic and filled with options, including the manual control ones. First impressions? Very elegant, compact and promising more camera goodies via software, AI and smarts rather than hardware somehow…

The first drawback is the slowness of switching camera modes… You can buy the device here.