Well, since the Samsung Galaxy Nexus is out today, it’s time to give it its first OTA update, courtesy of Verizon. The carrier that just started selling the phone today will give the handset Android 4.0.2 build ICL53F, as shown by their support page. Most of changes won’t be noticed immediately, of course, since the update is minor. 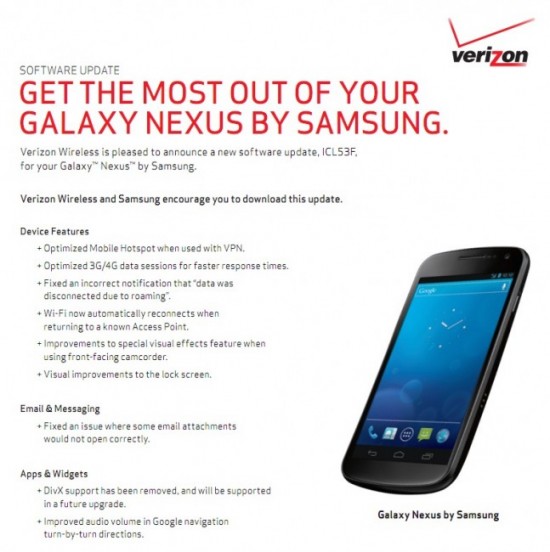 For one thing, you’ll get 3G/4G data and Mobile Hotspot over VPN, improvements to the visual effects function of the front camera and enhancements of the visual section in the handset’s lock screen. The update measures a mere 10.7MB, a download that will work fast especially on a 4G LTE handset. Another important feature that I want on all devices ever made and that I was surprised to miss from this phone is the reconnection via WiFi to a known Access point once you’re in its range again.

Issues with email attachments were also fixed and DivX support has been removed, but it will come back in a future upgrade. Well, I’m testing and reviewing a Galaxy Nexus right now and look forward to seeing some more changes… for example, I think that the volume is not loud enough, not even in YouTube videos, so what’s up with that?