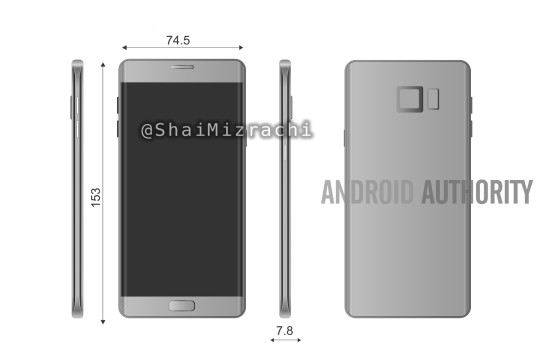 Samsung Galaxy Note 6 has been leaking quite a bit lately, showing that we’re not that far from its launch. It may even end up being called the Note 7, according to some newer leaks. Anyway, today we learn that the phablet will have a dual edge display.

It’s not very clear if the core version of the Note 6 will come with a curved dual edge screen, or a special Edge edition. The info about it comes from solid source @ShaiMizrachi, that has been accurate about leaks of the Galaxy S6 Edge, Galaxy S7 and more Samsung models. The newcomer is said to be 7.8 mm thick, meaning it’ll be a tad thicker than the Note 5’s 7.6 mm.

Samsung may include a larger battery and of course the edge screen. Previous rumors talked about an unveiling on August 2nd, so we’re pretty close to that time frame. Interestingly we haven’t heard speculations about the specs, other than clickable stylus, 5.7+ inch screen and iris scanner. I wouldn’t be surprised if Samsung jumped to 4K and 6 GB of RAM.